Confession time. When I began to write this piece I became distracted by another film on television and I put down my pen & pad for the night.

I have just gotten around to writing the review again this morning. Last night Three Billboards walked away with four golden globes. So, this might be difficult.

It’s not that Three Billboards isn’t a good movie. I enjoyed watching the performances of Frances McDormand, Sam Rockwell, Woody Harrelson, Peter Dinklage and that kid from Manchester by the Sea.

However the film itself annoyed me a little. The script is tight, the direction solid. My issue is, Three Billboards doesn’t really know what it wants to be. It is part black comedy, part drama, part western.

A year after her daughter has been raped and murdered, Mildred Hayes (McDormand)in an act of desperation purchases three billboards along a lonely stretch of highway to bring much-needed attention to the unsolved crime.

McDormand is outstanding. However her character does not seem very believable. “But it’s a dark comedy” up goes the cry. Fine. Take something like Todd Solondz’s, Happiness. This has to be the darkest of all dark comedies.  I can buy all the characters in Happiness. Mildred, I can’t.

In saying that, I am a huge Martin McDonagh fan. A former playwright, he shot to fame in 2007 with the cancer black comedy In Bruges. I defy anyone to watch that film & not enjoy it. Bruges is laugh out loud funny and a modern classic. I even loved McDonagh’s much maligned follow-up to Bruges, Seven Psychopaths. Three Billboards doesn’t get close to those two movies.

A bold claim, perhaps but I think Three Billboards will go the way of something like The Cider House Rules. A film lavished with awards and nominations that will leave audiences scratching their head as to why a few years down the line.

Fun fact: You might notice that, Mildred wears a bandanna throughout the movie. This is a tip of the hat to the 1978 film, Deer Hunter. Robert De Niro (when he was good) played the title character in said piece. McDonagh & Rockwell love that film.

Three Billboards Outside Ebbing, Missouri is released on January 26th in Budapest. 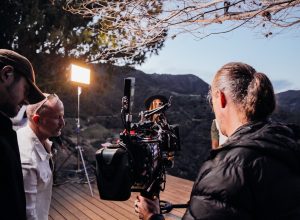