The month of months is here. Well, we are already half way through but there is still plenty of time to enjoy yourselves. Below you will find The Pulse guide on how to survive dry January.

But first. Let’s do a little history lesson.

You may know me as the craft beer guy. I can find my way around most of the fucking bars in Budapest. Not that it is something to be proud of.

I’ve been in this city a long time. So much so that if a Facebook casual acquaintance has friends coming to visit, I seem to be the first guy said acquaintance hits up for the go-to spot in town.

Usually I oblige. After the 40th or so request in a few months, I got sick of the asking and just started ignoring the questions.

I figured if someone wanted me to tell them where the new hot bar was then the least they could do was invite me along. Most of them never did. I gotta be honest and say the fact these people Facebooked yours truly with these requests terrified me a little.

I mean. What was my reputation like out there? Did people see me checking into various watering holes and assume they could ask me whatever? I could offer them recommendations but I was also the guy to avoid?

A few colleagues at work (who don’t really know the first thing about me) would call me a party animal. To my face. I was the party guy. I liked to go wild apparently. At least that’s what I was told. Little did they know that I hate those type of social gatherings.

Now I am not saying I don’t like to drink. You can find me out around three or four times a week. I may not necessarily be drunk, but I will be drinking. I tend to stick to the IPA’s during school nights. On weekends, I may throw in a single malt or cheap bourbon & coke. A party guy I am not. I prefer to sit with close friends in hushed bars and go over our lives.

People who I like and who have my number know that if they call me up then I will be usually down for a spot of drinking. As my friend, big Chris from Edinburgh says I am everybody’s best pal. I get on with mostly every cunt. Well the good cunts anyway. The not so good cunts, I tend to quietly avoid.

The last year (well 2017) has been a bit hectic. Yes. I have hit the bottle one too many times for my liking. Once after a heavy night out, I managed to lock myself in the spare room at home and I couldn’t get out.

In the morning, I escaped the spare room and my head went into the toilet. It was embarrassing, humiliating but also strangely a little exhilarating. That may not make sense to you. It doesn’t to me. I just knew it was a cool story. I could share it with my friends the next time I was down the pub.

My drinking had got a little out of hand. I came to the game late. The first time I ever got drunk was when I hit 19. My pal Ross had a free house (his parents were not in town) and we inhaled absinthe through a straw after an older neighbour had heated it up. I spent the next few hours running around the fields behind his garden.

Since then, well, I thought I had things mostly under control. I’d have the occasional mental night. On one of these mental nights someone suggested that I try dry January. Now I have long since forgotten who this good Samaritan was, but I owe them a lot.

The month off made me examine the extreme relationship I sometimes have with alcohol. I always feel like I am missing out on something (I’m usually not).

My first dry January was in 2015. I made it to the 25th. A Sunday, I believe. I can’t remember missing drinking for those twenty-five days. In fact, it was just a relief to make decisions (albeit sometimes the wrong ones) with a clear head.

A year later was torture. I spent most of the month holed up at home dreaming of cracking open the two craft beers sitting in my silver chrome fridge.

The soft purring of the fridge was almost hypnotic. I would avoid opening it for fear of catching sight of those two beers. When it struck midnight on January 31st, I hastily removed the dull gold caps on the beers and downed them both.

Afterwards I felt a bit like Ben Sanderson but I was due a reward after a drab four weeks.

Strangely enough, I came to dry January this time around without any concerns. I had proven to myself before that I could do it. I even vowed to myself that in 2018, I would go out.

My first excursion was a work do. All the food and all the drink was on the company. I felt if I were to break this would be the time. I gainfully stuck to non-alcoholic Staropramen all night long. I enjoyed myself.

I’ve had a much more socially active month than I did in January 2017. I’ve met friends for drinks after football. We launched Pulse with a mini party. I had another company bash in middle earth (the 22nd district) and despite having to suck down fruit juice & retire early the night went (I imagine) pretty much how it would have if drink had been involved.

In fact, I have enjoyed this break so much that I am thinking about giving up alcohol forever. Well maybe not forever. Let’s see.

Now back to good part. Here is how to survive dry January in Budapest. 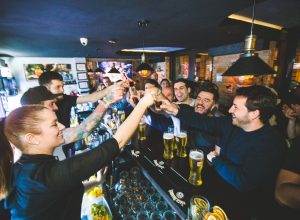