The week before Christmas, my girlfriend attended a traditional Hungarian pig cutting. For those of you who don’t know. In villages & towns throughout Hungary (usually in the winter months), locals awake and proceed to take a pig to pieces. The pig is bled & processed. It is dehaired & blow torched. Thankfully the pig is already dead when this happens.

I went to one of those things when I first arrived in Hungary and I have to say it had little effect on me. That is most likely due to the fact, I had downed a few gallons of palinka before the clock struck 6am. Pig cutting and getting pished go hand & hand. I recall the salty meat being a welcome respite from the 60% alcohol palinka. The people were friendly, the ham delicious and the drink free flowing. I enjoyed myself.

For my girlfriend things were a little different. She watched as the pig’s throat was cut. She watched as it was taken a part. She watched as her colleagues ate the pigs roasted blood. Since that day she has refused to eat any meat. Living in Hungary, her decision has been met with a little ridicule. She does reside in a small village after all.

I gave up meat myself in July 2015. A friend’s stag took us to Berlin. I queued three hours for the world’s best kebab. It was a good way to go out. The next day, a member of the group took me to a vegan take away & I figured I didn’t really need flesh anymore. True story.

Do I feel healthier? Not really. The gallons of IPA’s & whiskey put paid to that. I don’t miss meat at all though. The occasional steak craving aside, I’ve done alright.

Getting back to Budapest. Hunting down a half decent vegan/vegetarian meal in our city can sometimes be every bit as difficult as finding your way out of a frozen hedge maze at the Overlook Hotel. Though. Things have improved in the last few years.

My latest venture into Budapest’s plant based culinary scene was the highly recommended, Vegan Love. I had huge hopes.

You see, Vegan Love is brought to us by the same folks who run Magic Burger. Served up by the latter, The Vegan Juicy Lucy is hands down the best non-meat burger in all of Budapest. We will get back to Magic Burger. Later.

I went to Vegan Love on January second of this year. My travelling companion was Andre. My good friend from Brazil. Now, Andre won’t mind me saying this (I hope) but it’s fair to say he is as far removed from a Vegan as most people. Getting him into Vegan Love took some convincing. Andre, I owe you a few beers man. Without your participation this beautiful article would never have been written & our readers would remain in the dark when it comes to VL.

The first thing you’ll notice when you walk into Vegan Love, is how small it is. It’s a tiny hole in the wall restaurant. Nothing wrong with that. They. Get. So. Many. Things. Right.

We ordered at the counter. I plucked for the BBQ tofu steak burger. Fries was the side dish with a chili sauce. All of this didn’t come cheap. I paid around 1700 (minus a drink of any description).

The restaurant was crowded. We managed to grab a seat at the far corner of a long table by the entrance. Now this may just be me. When I go out for a meal I like to have a little privacy. Not much. Just enough to enjoy a conversation.

At Vegan Love, I was elbow to elbow with a young hipster couple in town from Hoxton. I knew they were Hoxton inhabitants as they would not shut the hell up about it. Not got anything against Hoxton. Had a couple of great nights out there in the past.

On my left was a local who had just stepped off the squash court. It was not a good look. Some people dig having strangers practically in their lap as they eat. Not me. It makes me a little uncomfortable. My bad.

The sensational food would at least take my mind off the close quarters, right?

The fries were probably the best part. They were crisp. The chili sauce was zesty.

My tofu burger was pleasurable enough. Just a little bit low key. It did not blow my socks off. Not like The Vegan Juicy Lucy.

Returning to Magic Burger. Since my girlfriend became a mini militant vegan activist. Seriously. As I write this piece, she is watching yet another vegan documentary on Netflix. Shaking her head ruefully.  These days, I need to sneak my cheddar around the back of the house before I consume it. There are only so many times I can be told that it’s not my milk.

Anyway, she brings up a decent point. If you are running a fully-fledged vegan restaurant & embracing that lifestyle, then how the hell is it still possible to profit off the meat trade?

You’ll find stickers in vegan love that show a hapless mother cow with the captions, not your mother, not your milk. Ok but with Magic Burger in the picture something about such slogans just does not sit right with me. Not that you give a fuck.

I recently tried, Vegan Love again at a small market in Ankert. There was a line half way around the block leading to the VL table. So, I figured I give them a second chance. This time the kicsi beautiful militant was in tow.

She went for the mac & cheese. Me. The pulled pork sandwich. Made with shredded beetroot. I think.

Again. It was all. A bit. Underwhelming.

There were more than a few other hot food stands at the market but Vegan Love does branding very well. They managed to sell us a ceramic coffee cup. For 2k. I’ve not used it once. My guess though is one of the other stalls most likely had better fare. They just all looked a little shitty & uninviting.

Vegan Love is a little too bland for my taste. I will be back. If they’ll have me. In the mean time I will be on the look out for a place that is adept at removing my socks. Or something like that. 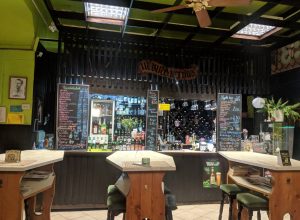