From Budapest Rooftop Cinema the team who made your summers worth living comes BBC (Budapest Boulevard Cinema).

The concept of watching some of the best films you can see in this city is brought indoors.

Everything about Kent’s title character is terrifying. A 7-foot-tall monster, cloaked in dark clothes with a white chalky face, he will stalk your nightmares if you are brave enough to enter Art+ cinema to visit him.

The tale is straight forward enough.

Amelia Vanek (Essie Davies) is a young mother who struggles to overcome the death of her husband whilst raising their 6-year-old son, Sam (Noah Wiseman).

Wiseman is one of the creepiest kids to appear on celluloid since Danny Torrance. He will give you the chills. His performance is tremendous.

Now back to the story.

One night, a pop-up book, titled the Babadook somehow finds its way into the young family’s home. After reading it to Sam, Amelia decides that the book must be destroyed.

Despite her best efforts the book (and the babadook) continue to return. Again, and again.

The Babadook, is (spoilers ahead) almost certainly a metaphor for the horrors of both child and parenthood. But that only adds to the apprehension as the film closes in around it’s captivated audience.

I never got a chance to see this in the cinema. I watched it alone in my house with the blinds tightly shut and the lights turned off. Well I wasn’t exactly alone. My wee dog sat through this extraordinary, intense and unsettling horror with me.

The fact my dog is a dead ringer for Sam’s puppy in the film was a mere coincidence and it didn’t mean I was nervously looking in my neighbor’s window for a sight of The Babadook. Well I did glance over every now and then.

Seeing it in a hushed theatre will be a whole other experience and I am looking forward to being there.

The Babadook, is a superbly acted, masterfully directed, subtly compelling and claustrophobic horror film that will leave you checking under the bed in search of imaginary entities for weeks on end.

One of my other favorite (if there can be such a thing) horror’s is also from the land down under. 2011’s, Snowtown is well worth a watch. It stars Daniel Henshall. Who pops up briefly in you guessed it. The Babadook.

The Babdook will be screened tomorrow at Art+ cinema. 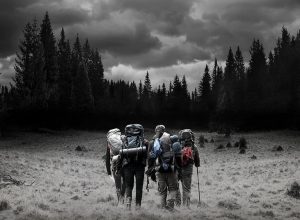