Sziget devotees Gogol Bordello are back in 2018, bringing their inimitable brand of energetic eastern European gypsy punk to proceedings. Blending punk rock with traditional slavic folk music, Gogol Bordello started out nearly 20 years ago, and haven’t stopped touring since. A Gogol Bordello show is just that—an extravaganza of exuberance. Garish outfits and high energy dancing against a backdrop of ludicrous instruments and ridiculous jokes are the order of the day.

Gogol Bordello’s frontman, Eugene Hütz, is descended from Romani gypsies. He is the son of one of Ukraine’s first rock stars and grew up on bootlegged industrial and punk bands before being evacuated from his hometown in the aftermath of the Chernobyl disaster. For seven years, Hütz toured the refugee camps of Eastern Europe, before washing up in Vermont under a resettlement programme. After moving to New York, Hütz started Gogol Bordello in 1999.

There’s a fun energy in Gogol Bordello’s music, and once you get your ear in, there are some really interesting tunes to uncover. Until you get a feel for it though, the music can sound a bit same-y and repetitive, and Hütz’s voice can grate on sensitive ears.

Learn the words to: Start Wearing Purple
Sound cool by saying: ‘I liked their original name better’ (it was Hütz and the Béla Bartóks, in case you were wondering). 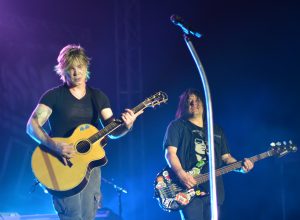