The wine bar for those of us who don’t actually like wine.

If you are like me and consider wine joints to be the height of pretension then, Doblo may get you all turned around on the subject.

Being from the streets of Compton wine is not high up on my list of must have drinks.

Well, I am not from Compton. But close.  I spring from Maryhill, Glasgow. There was the odd drive by shooting & on my lunch breaks I’d sling vials of crack cocaine in the school yard.

Ok, the weapon of choice in Scotland’s true capital is the knife and the closet we ever get to wine is the old Buckfast.

At least it was that way when I was growing up.

Working class Glaswegians born in the eighties don’t have much time for a merlot or a cabernet sauvignon. I had always considered crushed grapes to be the nectar of the middle classes.

That was until, I got to Hungary.

Wine is for all of us in Hungary.

Hungarians love their wines and they constantly reassure me that they make some of the best in the World.

My problem is this. I wouldn’t know. I cannot really tell the difference.

A cheap wine tastes the same to me as a vintage merlot.

So, if I happen to find myself in a wine bar there must be a damn good reason for it.

Doblo is that reason.

It is quite possibly the coolest fucking bar in all of Budapest.

If you can avoid the tourists and the cyclists (some of whom may be tourists in disguise) on the narrow Dob Street corner, then step inside the sleek locale and be overawed.

On my first visit here, I was celebrating my thirty fifth birthday. 35, Jesus. As Junior Soprano once said. My dad told me never to get old, I should have listened to him. I should have.

Anyway, after a mini bar crawl to honour my impending fourth decade on this Earth I approached.

I’d been to some of my favourite craft brew bars in the city earlier.

Doblo didn’t have a chance. Or so I thought.

I bounced inside escaping the creeping cold of a brisk October night.

The place is simply staggering.

It quietly screams chic as fuck.

The waiters will greet you like a hot first tinder date. They will be all over you.

Reach for one of the many gleaming spirit bottles they have readily available.

Well, don’t reach for a bottle. Just politely ask the waiter to pour you a glass.

They have almost everything.

Fancy a palinka to wash away all the goodness of the night? Then go for the premium brand, Arpad.

I once bought a round of this stuff for a group of Swedish police woman on a roof top bar in the city. It set me back about a month’s wage, but it was worth it just to watch them toss the contents of their glass off the side of the building. True story.

For those of us who might be tempted by something different then look out for the Doblo selection palinka. It is kosher.

Whenever I hear that word I am always reminded of the chapter in American Psycho when Patrick Bateman goes into a kosher deli and tries to order some cottage cheese and a vanilla milkshake.

You don’t remember? Not to worry. Patrick Bateman was an arsehole and so am, I for bringing this up.

On my Doblo birthday trip I went for a Japanese whiskey. Nikka from the barrel.

I washed it down with a gay beer. The Dutch like to call it Heineken.  I did not know that said beer was gay until that night. Hell, I didn’t even know that gay beer existed.

I was a little unfortunate to sit beside an inebriated Kiwi who filled me in on the joys of gay beer drinking.

Heineken must be frowned upon in the land of the long white cloud as this boy was not letting up. He called my beer gay. He did not specify why before striding off into the night leaving me perplexed.

The strangest thing was the poor fucker had apparently been drinking Heineken all day long. That’s what my barman said. Maybe he just wanted to make me feel better.

Now getting back into it.

Go for a half glass. A full glass. Or a bottle.

I am told that the go to wine in there at the moment is the Pannohalmi Apatsag Pinceszet. A 2016 pinot noir. It is wasted on this writer, but you might enjoy it.

The food may be a supporting act but is still bloody exquisite. The bites primary function is to compliment the Heineken and the wine.

Get fired into the olives and blue moulded cheese. They will save you from falling off your bar stool.

After my bar crawl it wasn’t long until I returned. This was on a low-key night. A, Sunday if I remember correctly.

Again, I went for the whiskey & olives diet.

A roma band played a jaw dropping set. The lead singer made his way around the clientele in the room, our faces stretched out in warm smiles as he took our hands and lead us in a fucked up but very friendly dance.

As the band took a break, I stared at the rapturous Japanese tourists in the corner. They were surrounded by huge wooden platters of Hungarian cheeses.

They held their wine glasses close being careful not to spill a drop. Even for me, the wine looked too good to waste.

The tourists and the band were not the only thing that captured my attention that night.

I had long heard whispers of a small staircase that led to a secret room under Doblo. I was determined to get in. The only question was, how?

My girlfriend who works in the wine industry said that you needed a black members card to reach the staircase. This black card supposedly has the image of the joker on it.

To me this sounds like a horror movie but that’s probably my over active imagination.

We asked the barman about the bunny girl and the joker. Despite the knowing look in his eye, at first he was quite elusive.

Eventually he confirmed that the room existed. He would let us see it the next time we visited.

We left on a perfect cliff-hanger. 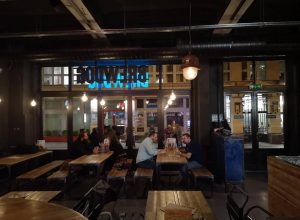