Its name makes it somewhat intimidating for the typical scores of Stag Do lads to slowly and patronisingly ask for directions, this is one of the reasons I would suggest that Élesztő is something of a hidden gem when discovering amazing craft beer in Budapest.

It is not just the odd appearing name that makes it more a spot for the locals (or hipsters) but the location helps keep it more rakish than rowdy and more bucolic than boisterous. It is only a five minute walk from Corvin Negyed making the journey in and out easy through use of bus, metro and tram.

After arriving at Corvin sneak down Tűzoltó u. and you’ll find Élesztő just after passing the oddly beautifully bricked walls of Aldi Supermarket.

Upon entering the bar you’ll feel a very unique bohemian atmosphere of mismatched chairs, tables, bike racks, an old table football, large ’beerhall’ style tables and that’s only in the outside.

The inside has a pleasant industrial, yet welcoming, feel and deeper down the lower level presents itself as almost like an old cinema, only the audience is not waiting for the latest Hollywood film, they tend to be working their way through a selection of 21 different Hungarian craft beers on tap.

Now the cinema analogy works in various levels for myself, being a tight Scotsman, I tend not to shell out and splash the cash on attending a big budget blockbuster.

My 200 Forint coins are carefully spent on the lower costing titles, in beer form namely, Propaganda and Ír Vörös which will set you back less than 800 Forint.

Some of my drinking companions don’t hold back so much and they will venture through many different beers and I am still to hear a complaint about what Élesztő has to offer.

I have spent many pleasant evenings in this bar and I see it very much as my local. It works well for almost any occasion, be it a small chat with my compatriot, a quiet beer with my dog, a get together with work colleagues, a birthday… Just about anything, aside perhaps a Stag Do!

Oh, and the odd name? 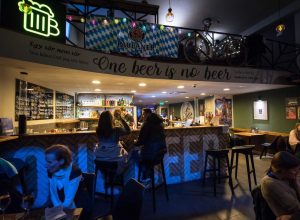