Originally beginning life as a folk duo, Wolf Alice as we know them only started to take shape in 2013. It was then that the folk twosome became an indie alternative four piece.

Hailing from North London and led by the irresistible Ellie Rowsell the band will play Sziget for the first time on August 5th.

Rowsell was very much in danger of becoming this writers latest indie girl crush, but Jenny Lewis still holds that title. Jenny will never be beaten. Ever.

For such a young group (they are only two albums in), success has come quickly. Most of us became aware of them when the song Silk was used in the Trainspotting 2 trailer.

Upon hearing that tune, it was one of those ‘who the fuck is that’ moments and like me, I am sure a lot of people rushed online to find out.

The 2016 documentary by director, Michael Winterbottom of The Killer inside Me fame captured the bands rise to prominence. The explosive exuberance of Wolf Alice’s shows is there for all to see in Winterbottom’s film.

Currently on tour with Queens of The Stone Age, Wolf Alice are fast becoming one of Britain’s biggest indie bands. Get on them early.

Incidentally, for those of you who care, the band’s name is from an Angela Carter short story. I just thought I would mention that before the piece was done.

Learn the words to: Heavenly Creatures

Sound cool by saying: “The You’re a Germ video is clearly inspired by The Town that dreaded Sundown. Maybe.” 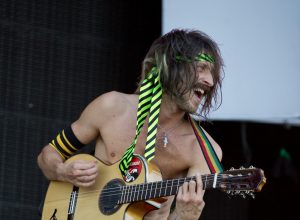