There is something always rather comforting about soup. It is synonymous with warming the soul on a chilly winter’s evening and it has the almost paradoxical benefit of cooling you down during a summer’s afternoon. There is indeed something safe, special and scrumptious about soup and Leves, found just a stone throw away from Liberty Bridge, offers a range of this luxurious liquid stuff.

Leves.’s premise is so simple and striking that while I dig into some of my personal favourite sweetcorn soup I cannot help but think… Why did I not come up with this idea? It is a tiny spot, rather basic interior but they demonstrate the effectiveness of strong branding, clever use of social media and a rather novel approach to one of man’s oldest of dishes.

Their choice of soup varies day to day, typically they have three soups up for grabs and thankfully, at least one vegetarian option. Before my recent conversion to veganism, I would pile cheese on top of my soup to thicken it and give it a nice dense and stringy consistency that makes it troublesome to eat with grace, but your belly will be grateful for the grub.

As previously stated it is the tiniest of spots so the next step is selecting where to enjoy your hearty soup as you parade up and down Vámház Körút with the distinctive white cup with a red ‘LEVES.’ proudly printed gripped in your eager hands. I humbly suggest two wonderful locations that are as scenic as the soup is flavoursome. The first could be regarded as a rather obvious suggestion, it would be Fővám Tér, looking out to Liberty Bridge.

Liberty Bridge is, without doubt, my favourite of the bridges in Budapest. It seems to embrace the seasons with pride and a timelessness. Slowly spooning the wonderful soup from Leves. while people watching, and bridge admiring is something that can be dangerously underrated. My second destination is one that is close to my heart, a lovely secret retreat in the form of Károlyi Kert.

Károlyi Kert is a five-minute stroll from Leves.. It is a quaint park that offers an array of benches, chess boards, great greenery and even an adorable plump rabbit living in a quirky hutch by the public restrooms! It is a safe retreat from the drumming of the trams and the orchestra of tourists. Leves.’s soup is made to be enjoyed, savoured and I am still to be left disappointed from their various offerings. Be it spicy lentils, broccoli, creamy potato or, as mentioned, my favoured sweetcorn soup, Leves has always delivered. I strongly recommend getting your hands on their simple yet oh so effective white paper cups and warm your hands, heart and soul. 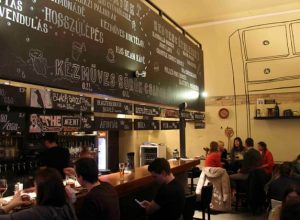