A beauty and the beast type fable set in 1960’s Baltimore but it may as well be set in a parallel universe as the world feels slightly off kilter but this only adds to the films magic realism.

Sally Hawkins plays the mute “princess without voice”, Elisa. When night falls she works as a cleaner at the top-secret Occam aerospace research facility alongside the bombastic Zelda (Octavia Spencer). Zelda does the talking for both and generally keeps Elisa out of trouble. When a new asset (a half man, half fish) is wheeled into the laboratory, Elisa immediately strikes up a connection with the creature.

The beast was captured in the amazon & dragged kicking & screaming all the way back to Baltimore by the fearsome government agent, Strickland (Michael Shannon). Shannon as ever does wonders with his role and brings true empathy to a real-life monster.

Strickland’s intention is to rip the creature open and find out what’s inside. The marine biologist, Dr Hoffstetler (Michael Stulhbarg) has other ideas and the two clash heads as Elisa and the Amphibian Man grow closer by the day.

Elisa brings her new (and probably first) love eggs to devour & plays him music as they dance alone together at night in the empty lab.

In a movie filled with them, there is an especially heart-breaking scene when Elisa tells her closeted neighbour & the movies narrator Giles (the outstanding Richard Jenkins) that when the creature looks at her, he does not know that she is incomplete.

Everyone in this beautiful story are in some way fractured & unhappy.

Del Toro is an exquisite filmmaker, and this is probably his best work to date. I love Pan’s Labyrinth and The Devil’s Backbone, but The Shape just shades it for me.

A timeless classic about embracing the other that will be admired well beyond all our lifetimes.

The family of the Pulitzer Prize winning playwright, Paul Zindel recently sued Del Toro and the films producers for plagiarism. In 1969, Zindel’s play Let Me Hear You Whisper was adapted by PBS for a TV movie. The story follows an isolated cleaning lady who attempts to save an aquatic creature from a military lab. Sound familiar? In Del Toro’s defence, The Shape of is packed with homage after homage and even if he borrowed a little too much from Zindel it is still a must see film. 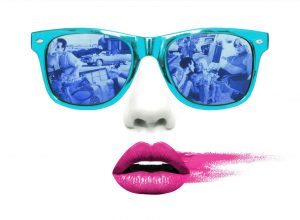