Even in a city like Budapest, the vegans are probably winning the war.

Now do not get me wrong. Hungarians won’t be given up their meat any time soon but there are more than a few vegan restaurants springing up, strategically placed ready to take over when the time is right.

Budapest’s craft beer revolution started in a not too dissimilar fashion.

Even a few short years ago, you’d be hard pressed to find anything other than a headache inducing flat Dreher and before you could say Evil Twin any bar that didn’t have a good selection of artisan brew on tap was dead to the hipsters.

Food and the way people eat is going much the same way. Expats have become tired of fried cheese & boiled rice.

Even the four million burger places that seem to keep popping up are getting a little boring.

Whenever I venture out to a restaurant these days my first thoughts tend to be this.

Does it do vegan?

Is it any good?

How much am I going to be pay?

And can I get my name on the guest list? I only do the last part when I am pretending to try to get into Doroso. You should give it a go some time. It makes the whole dining experience much more enjoyable.

Despite all of this, the recent vibrant explosion of vegan joints throughout our city is not without it’s disadvantages.

Pretty much every one of these establishments looks the same.

They lack any real character. You will quickly notice the identical furnishings and the colourful painted chairs that wouldn’t be out of place in a Care Bears episode.

That being said who cares about aesthetics if the grub is any cop right? If you’re like me and that’s your take on most restaurants then Great Bistro is probably a safe bet.

I took my girlfriend and her mum to this 5th district café last weekend.

Great Bistro is behind the Arany Janos metro station.

Upon entering we were met by a thoroughly depressing scene.

The restaurant was deserted. At 8pm. On a Saturday.

Unless you count the young, lone American who had received a coke that he didn’t order and was kicking up a mini fuss. And no one counts him.

I almost convinced my companions to leave. In the end I am glad I was outvoted.

Our overzealous waiter could not have been more attentive if his tip was dependant on it. This isn’t a criticism.

I would rather have that type of service than the typical Budapest waiter who will make you think their dog just fell head first out of a 12th floor window.

Well, that’s what I always imagine when I am met by the latest in a long line of miserable Hungarian servers. Surely a pet or a close family member just recently passed. I am probably overthinking this?

Being on a teetotal kick in the last few months or so, I scanned our drinks menu for signs of any decent near beer. To my horror, I discovered for the hefty sum of 1k I could bag myself a Sorporni alkoholmentes. Asking Roy Batty to gouge my eyes out would have been more preferably.

Instead I went with the strawberry and banana smoothie instead. Despite the rather paltry 250ml serving for 800 Huf, I still enjoyed it.

Deciding on which mains to order (I skipped the starters) was rather less problematic. There was only four to choose from.  Although the menu is interchangeable. I plucked for the club sandwich. As you can probably imagine a vegan club sandwich is a little different than a real club sandwich.

For the finishing touches came a lemon tart.

All three of us huddled over this one tiny little lemon tart.  Silver desert spoons at the ready.

The tart was zesty, tangy and just the right side of heaven.

Now I’ve visited many a vegan restaurant but I will say this.

Great Bistro is the best of the lot.

Forget the name. I am sure it is a piss take.

Just close your eyes and go for the food. The portions are dainty but especially filling.

Unlike a lot of Vegan options in the city, you know this place is for real.

Many of the other joints are make believe.

What I mean by that is they are dishing out substandard fare & overcharging you just because you want a meat free meal.

Well, that all changes with Great Bistro.

Not the overcharging part. You will still pay a small premium. By God it’s not cheap. I almost had a heart attack as I counted the price of our meal in my little wormy brain.  Next time though, I will come prepared.

As we preparing to leave a young couple waltzed through the doors. Dressed in identical woollen hats with sullen sunken features. They were regulars. They shared a familiar nod with the waiter and took their seats. Not far from us. Their food arrived shortly afterwards & they devoured it with relish. They clearly had known something we had just discovered an hour earlier.

Great Bistro is the go to place for vegan treats in this fair city.

If I find better, I will let you know. Until then come a running to Bank utca. 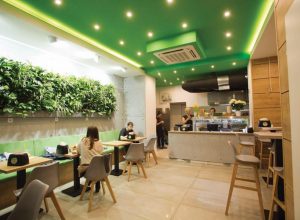