In just over a months time, the World’s finest craft breweries roll into our city for the first ever Budapest Beer Week (BPBW).

The Pulse office is more than a little excited. The truth is we can hardly wait.

Whatever way you cut it, the BPBW  guys are true trailblazer’s.

Nothing of this scale has ever been done in the Hungarian capital. Everyone who has ever sank a craft brew should get behind this festival.

Pulse will be there & what a line up we will find.

Magic Rock, Brewdog, Edge Brewing, Lervig & many, many more are all in town.

You do not want to miss out.

In the meantime. Get stuck into our great interview with BPBW organizer, Marton Sefcsik below.

So, let’s start. Can you tell us how you had the idea for BPBW?

It was born at a craft beer bar called Hopaholic in Budapest – as they say – under the influence. However, it has turned out to be the elephant in the room; as soon as we started working on it, we had to realize that several other people also started making their moves. However, ideas are overrated, what matters is execution. I believe hard work really pays off as we’re still here doing this interview!

Marton. What about yourself & the other guys? What are your day jobs?

We like to think of ourselves as three beer enthusiasts who all have roots in Budapest and work in different areas of the beer industry. We’ve never organized anything like this before… We’re not ‘big money’ people neither, we just like to think that we have what it takes to make a festival big like this happen thanks to our love towards craft beer and our different experiences from other industries.

Peter Pazinczar (director of BPBW) is an entrepreneur working in the IT sector who also runs an up and coming gypsy brewery called TuffBuzz.

Tibor Rebak (vocational manager) is a professional brewer who previously worked with Höganäs Bryggeri, BrewDog and Signature Brew now (he is) strengthening the team of Poppels.

Me, Marton Sefcsik (communications) work in online marketing and sales. I am the founder and editor in chief of the local beer blog Fenekig.Com.

I also run a guerrilla brand called Party Or Die.

However, beer is not the only bond among us: we’ve all spent years in the Hungarian underground playing in different punk and metal bands.

We also got the ‘Kraft Association’ – an organization uniting the best Budapest breweries including MONYO, Mad Scientist, Horizont, HopTop and Balkezes just to name a few – to join forces.

Who do you expect to attend the event?

Half of the ticket sales are from abroad, so we’re expecting the same international community to show up as you can meet at MBCC, TCBW, Brewskival, etc etc.

The local scene is not that strong yet to make a festival like this sold out, but we’re getting some really positive feedback from newcomers in the craft beer world as well.

Recently the Hungarian ‘big beer’ companies started to produce their (own) ipas, pale ales and dry hopped lagers, which is controversial on one hand, but also opens up our subculture to a lot more people than before.

And you know… Once you go craft, you never go back! (I’ve just made this up and I won’t Google this, haha!)

When did you guys first get into craft beer?

By the time of the early years of the bottle shop called Csakajósör and the year of the first national craft beer fest in Budapest called Főzdefeszt. 2010-2011. The beers were more simple, but we kinda think about those days with some weird nostalgia. Needless to say, the Hungarian craft beer came a long way but still has a high road ahead.

What makes the Budapest craft beer scene unique from any other?

What is truly exciting, that there’s no week without the premier of a new beer or the opening of a new crafty place. I’d say the scene is strong and better developed compared to the surrounding countries. Trends have an impact on everyone, sure, but I believe here Hungarian breweries are not copying them blindly.

As consumers we start to know what is quality beer and as breweries we’re not afraid to go the extra mile.

Budapest is a vibrant and colorful city with rich culture and history, so it’s hard to make statements that fit everybody though, but this is definitely a strength that each of us see the World a bit different, so there’s no typical Budapest craft beer or brewery.

I moved to Budapest in 2007. At that time the only beer one could find here was Dreher or Soporni. The rise of hand crafted beer has exploded in recent years. When did you notice that craft beer was taking over Budapest?

Haha, and what about Borsodi? Kőbányai?! (Just teasing you.) We like to think there’s a craft beer revolution going on, but we still live in a small bubble. You’re simply meeting the very same faces at the very same pubs.

As I told you earlier, the big beer companies entering the market with their tries on the classic craft beer types are sure opening up this pit! I’d like to think that this is the year when we can say craft beer is finally taking over Budapest.

Obviously not only because of BPBW, but it’s one of the reasons for sure.

When the festival begins, I will be hitting up the Pohjala and Magic Rock stalls. Which stall will you guys be heading to first?

As organizers, the right answer is that we love all our invited breweries the same way! Of course, we love some of them more, but here’s the thing: we tried to make things happen without compromises, only inviting names we all love and praise. We also tried to invite breweries from the region as well, that’s why we’re happy to have Bevog from Austria, The Garden Brewery from Croatia or Browar Golem for Poland, just to name a few.

Now that I started dropping names, I need to answer the original question. I’ll sure start at To Øl, because as a blogger and consumer I have a crazy respect towards them on so many levels: the beers never fail to amaze me and the designs (and the stories behind them) are brilliant.

I’m also a metal head (heavy music seems to take a huge part on the scene), so I can’t wait to have some small talk with the guys from 18th Street Brewing, Amager Bryghus and Pipeworks.

On a related note, Pipeworks has been on my radar for 1-2 years now as I’m a huge fan of their designs and attitude. I’ll sure be sticking around at the stand of Wild Beer Co… Their beers are beautiful! Anyway, I could go on forever, so let’s jump onto the next question…

If I was coming to Hungary and I could only have one beer, say an IPA which one would you recommend?

Balkezes Greyjoy. An imperial ipa with tea and bergamot… These extras are not only for the purpose of some gimmick, they make the brew complex, rich, well balanced and super easy to drink. Gotta love it!

My favorite bar in the city is Hopaholic. I love the guys there. Peti, Balazs & co. What is your favorite watering hole in the city?

We’ve been socialized at Csakajósör, which we always reflect on as the cradle of modern Hungarian craft beer… It’s ran by the same owner who does Hopaholic (the grandfather of Hungarian craft beer? – sounds stupid, I just made this up as well), a cozy bottle shop which we never fail to visit on a regular basis even to this day, when on every corner there’s a new craft place is being opened.

Where do see the Hungarian craft beer scene going?

There were times when the demand was higher than the supply; this has changed in the last 1-2 years, so these days we’re moving towards quality. It’s not enough if you’re beers are okay anymore.

To stay on the scene, you need to impress your customers month by month with new and wild brews, but also, you should keep your core range on the same high quality. The days of shady businesses and mediocre beers are hopefully numbered! Not everyone will survive, but people are working hard on this every day, so in the end the customers should be the biggest winners.

In any other European country the ticket prices would be considered a bargain. In Hungary they are a little on the expensive side. Have you faced any flak for this?

Oh, trust me, we’ve been thinking about this back and forth. If this festival could have been done with cheaper tickets, we would have done it with cheaper tickets. This is the price of quality. We wanted a festival that fits our high standards. No bad compromises. No stand places sold for breweries who don’t meet our standards (we only invited breweries by the way). No awkward surprises.

We’re insiders enough to know how the industry works, but we’re outsiders enough to know what satisfies the consumers. With your ticket, you’re not purchasing X glasses of beer (hey, it’s unlimited anyway), you’re treating yourself with a unique experience you’ve only had to chance to before if you travelled to Copenhagen, Tallinn or London. Now it’s right in front of you in Budapest…

And finally, what are your hopes for (the) BPBW?

Apart from raising hell and having a good time, (our hope) is to connect Budapest and the Hungarian craft scene into the international streamline of good beer. 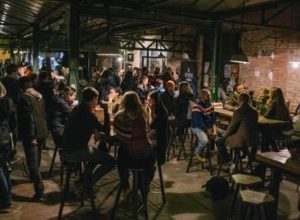