For quite some time now I’ve been gagging on an imperial stout.

Not just any imperial stout.

The drink I so desire has already been in my life.

A show stopper of a brew blasting in from Stockholm.

Founded in 2011 Omnipollo are one of the World’s top craft breweries.

What I’m going to say now might get you a little excited.

These guys will be rocking up to Hungary as part of Budapest Beer Week.

Catch them at Bölcső Bár and food next Tuesday (all the details below).

Just make sure you go for The Noa Pecan Mud.

Well I am glad you asked.

This beer reminds us all of sneaking handfuls of desert from our grannies kitchen.

It is redolent with beautiful tones of chocolate.

At 11% this sherbet may leave you staggering around.

I’ll assume you’ll be at Bölcső.

Pulse will be in line.

Cup out begging for some more Pecan Mud.

We won’t be able to control ourselves. 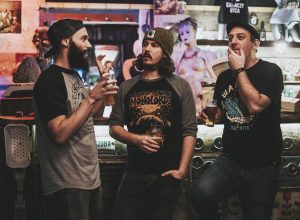