This week’s tipple is Trance by Hopfanatic.

It i something of a blast from the past.

Well from this writer’s past at least.

Let me elucidate so you know what the hell I am going on about.

Hopfanatic on Hunyadi tér closed its doors to the public in 2015.

No longer could you leap down those brick stairs to the mould invested basement.

This wee dive bar was for locals & a handful of lucky expats.

You’d take a huge risk by breathing in the stale air.

We came for the beer & the miserable waitresses.

At that moment, Hopfanatic was the one of the top craft beer bars in the city.

It was a glorious time.

If you didn’t fancy Trance, you just ordered up a Fekete Erdo & your night was complete.

And now it’s all over.

The few of us who stormed the basement on Hopfanatic’s closing party left with boxes full of craft masterpieces.

When 10pm struck despite our protests, the miserable waitresses refused to give us any more brew from the tap.

We were all devastated.

I personally never thought that Hopfanatic would ever return.

Then last summer, I heard rumours that Hops brewmaster, Tamas Kiss had been gypsy brewing in his garage.

I didn’t believe it until Hopfanatic made a triumphant tap take over return at Léhűtő.

I grabbed my wallet & made a mad dash over to Gozsdu Udvar.

After years apart I could finally get my hands on another Trance.

Now that I’ve rabbited on for five minutes let me tell you something about the drink itself.

After a couple of pints you will be delirious.

In a very, very good way.

Trance is their signature beer.

If you happen to come across it. 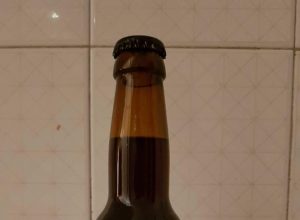 Tipple of the week: VaskakasSörfozde Porter (5.5%)