Matt Watson-Broughton is a sports journalist who has written for Uefa & The Hungarian FA.

Matt is the general manager of Budapest Celtic.

Check out his take on Russia 2018 below.

What are your earliest World Cup memories?

My first memories of a World Cup come from Italia ’90, it seems that many people’s first major tournament is their favourite and shamelessly I’m no exception.

Roy Aitken on the front of the sticker album, Caniggia taken for target practice by a queue of lunging Cameroonian defenders stretching half the pitch – playing with abandon and courting an abandonment; the ‘Divine Ponytail ’s first major tournament, Packie Bonner’s serene dive to deny a Romanian in the shootout and O’Leary coolly sending Ireland through to a meeting with the Pope.

And then hosts Italy in the quarters.

And then there was England. I knew it would be good with four geordies in the squad (yes, I’m biased) including one of the players of the tournament in bubbly, young Paul Gascoigne and of course the manager Bobby Robson too.

Barely adequate in the group stage, England’s last-second winner against Belgium in the 2nd round and that last-eight flirtation with catastrophe against Cameroon were relayed to me as a 7-year old in bed from downstairs in Newcastle before that night in Turin. I watched that epic semi-final at my grandmother’s house outside Glasgow – she with no time for the sentiment of sport – and I cried after we crashed out against West Germany on penalties.

My grandma was so perplexed by my tears that she phoned my parents to ask what was wrong with me. Who knows how long that call took…

What can we expect from England?

Well, we just don’t know yet but the prevailing suspicion is that England, still recovering from large parts of the last 150 years spent blinkered up their own backsides (granted, save for fleeting moments of success or perspicacity), are still four or eight years away from reaching their current potential at a major tournament, which must surely be a last-four spot or even victory, given that their Under 17 and Under 20 teams are both current FIFA world champions in their age groups.

Gareth Southgate, he of relegation with Middlesbrough in 2009 and not much else as a manager, has highlighted the current dearth of successful English head coaches by his very appointment as leader of the national team less than two years ago, but he is known to be an urbane, intelligent man keen to execute Team England’s new blueprint of success by bringing England’s best through the age groups into the full side with the same playing philosophy and his selections prove this – many players in this young squad have plenty of international experience at youth level, albeit few are genuinely world class yet.

Therefore, while the reasons for our usual failure will be different (I would need a whole World Cup to explain my thoughts on past debacles), I expect England to do what they usually do; have a hiccup in the group stage (possibly a draw with Tunisia and/or a defeat to Belgium) but scrape through to the 2nd round where they would meet a side of similar quality, i.e. one with clear attributes but not among the favourites for the trophy.

If we negotiate an enticing fixture against one of either Poland, Senegal, Colombia or Japan, a lack of genuine creative quality at the heart of midfield would likely be one of the factors which would lead most to expect a knockout tie against Brazil or Germany to end in tears again (maybe I’ll control myself better this time though).

Who are the key players in each group G side?

Fans of English Premier League football may remember Tunisia’s Wahbi Khazri scoring against Manchester United during one of Sunderland’s great relegation escapes in 2016 before suffering the dreaded drop a year later – the attacking midfielder now displays his dead-ball skills for Rennes in France. Defender Ali Maáloul also possesses fearsome set-piece scoring ability at club level (more than a goal per four games on average) but he has yet to notch for the national team. Leicester defender Yohan Benalouane is in the squad with most of Tunisia’s players plying their trade in France or Saudi Arabia.

Panama are rather an unknown quantity with forward Ismael Diaz one of the few to play in Europe – he plays for Deportivo La Coruna’s B team. Nineteen-year-old José Rodriguez, in the reserve team of Belgian club Gent, has made the squad despite only making his international debut last month while I’ll have half an eye on the tremendously-named Armando Cooper. Erick Davis might have some of the closest links to Hungary at this World Cup; the Panamanian midfielder plays for Slovak club FC DAC 1904 Dunajská Streda, who were founded 114 years ago as a Hungarian club and retain a significant following of Magyars from Budapest and beyond.

For Belgium, winger Eden Hazard is clearly a huge threat, as are Romelu Lukaku, Kevin de Bruyne and Michy Batshuayi, not to mention the likes of Thibaut Courtois in goal, Vincent Kompany, Toby Alderweireld and Jan Vertonghen in defence and the experienced Axel Witsel and Moussa Dembélé in midfield.

Head coach Roberto Martinez, on whom the jury is very much still out, could even afford to leave Roma midfielder Radja Nainggolan at home for this competition, a selection which prompted the 29-year-old’s international retirement. This is certainly a crucial tournament for Martinez who you feel has got to reach at least the quarter-finals in order to be able to claim this side has reached anywhere near its potential.

As for England, they’re nearly always physically spent by the time a major tournament comes around so any sort of winter break (due to be implemented in 2019-20) can’t come quick enough. Captain Harry Kane (13 goals in 24 England appearances) is supposed to score the goals with Raheem Sterling and Marcus Rashford the two other players perhaps most likely to truly announce themselves on the world stage. Much of the creative burden, too much for my liking, lies on Tottenham playmaker Dele Alli, while at the back a three-man defence seems certain to include the pacy Kyle Walker and Manchester City’s ball-playing centre-back John Stones. Goalkeeper is normally a key position which provides stability but Southgate’s likely preferred custodian, 24-year-old Jordan Pickford, only has three caps – could his inexperience prove telling at the highest level?

One would be slightly daft to tip anyone other than Belgium and England to progress, but major tournaments always include big failures – there’s a lot of pressure on a star-studded and much-hyped Belgium team and Tunisia have looked full of heart and vigour in recent 2-2 draws against Portugal and Turkey and a single-goal loss to Spain. That’s all I have to say on that one…

Firstly, I sincerely hope the Video Assistant Referee will prove itself worthy of use. On the playing side, I fancy Serbia to go far thanks to the goals of prolific striker Aleksander Mitrovic and for Croatia and Uruguay to be propelled far into the knockout stages by inspired performances from Luka Modric and Edinson Cavani respectively.

The conditions by which the host country has been decided in the past, the ticket allocations for fans of the participating countries in the knockout stages and that club football doesn’t do its best to ensure players are in the best condition to showcase their skills in it. That’s the world we live in, unfortunately. Still, what a great event and, having attended two tournament finals (and many other sporting events besides), I can say it really has an atmosphere unlike any other. 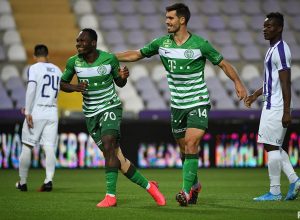