Last week at Pulse we launched our World Cup guide.

Somewhere in Scotland my best friend, Mikey Burnett wanted to get in on the act.

Mikey is an Edinburgh based playwright.

Check out his favorite World Cup memory below.

Well, to be honest, this could be any number of England’s tournament eliminations.

Even the ones prior to my birth.

But, yeah. I think I’ll settle on this one.

Of course, by the night of the game, Scotland were already long gone.

Unluckily humiliated 3 – 0 by a cheating Morocco.

I cried after that game for two days straight.

Locked myself into my room. Refused to speak to anyone, and I went on hunger strike.

That is until there was a knock at my door.

It was my dad, he sat down at the edge of my bed and told me that England had gotten Argentina in the last 16.

I remember smiling at him and asking ‘’Seriously?’’

It was sort of like that moment when Adrian told Rocky that she wanted him to fight on and win.

The night of the game I was nervous.

Even booing God Save The Queen was somewhat of a challenge.

The butterflies were effecting my voice. I sat inches from the telly with my Saltire flag proudly covering my body.

I did my best to belt out the Argentine Anthem but I didn’t know any Spanish.

Honestly, my mind was all over the place.

But then, before I knew it, kick off.

Argentina win a penalty. Batistuta stands over the ball and smashes it into the bottom left hand corner. Seamen gets a lucky hand on it. But the shot is too much for him and we’re 1 – 0 up. I run and scream all over the house and into my street. I can hear all the other houses around us erupting too and I shed another tear but this time it’s of pride.

I’ve hardly settled back down in front of the telly though before Owen dives and the ref points to the spot once more. Shearer stands over the ball. Just like he did in their opening match against Tunisia. And now I am again willing him to somehow break his own leg merely by standing still over a piece of leather filled with air. But nah, no luck. The bastard scores and he’s running off with that admittedly cool raised hand celebration. A celebration which I now know he had stolen from Denis Law.

I’m crying again into my flag. But then my dad reminds me that there is still plenty of time left for a lot more Argentina goals. I’m just about to thank him for his kind words but before I can Owen picks the ball up from just inside his own half. I’m wondering why he isn’t passing to one of his shit team mates. Why he keeps running and why none of the Argentine players are not attempting to assault him. And then it happens, he’s inside the Argentine box. He then takes what can only be described as a decent shot and it somehow lands in the top corner.

It’s now 2 – 1 England and I’m no longer just crying. I am also hyperventalting and howling uncontrollably into my dads shoulder. And all the while I can hear the commentator going off his rocket in the background and every word he is telling me about what I just saw ‘’Is that true, da?’’ I say ‘’Is that really yin ae the best goals ever scored by any player at a World cup?!’’ my dad strokes my head. Offering me words of comfort ‘’No, son, No. Archie Gemmils Goal in 78 wis much better than that’’ hearing this made me feel better. And I was back sat on the floor again inches from the telly.

Argentina soon win a free kick just outside the England box. My dad says ‘’That’s a bit harsh’’ and I was like ‘’Dad, he nearly fuckin killed the guy!’’ looking back now though, after twenty years. I must say that my dad was in fact right. It was a bit soft but what resulted from it was, and always will be, a thing of pure be beauty. A clever set piece which completely bamboozles the English wall. Instead of a shot, its a sly pass, Simone to Zanetti, and bang, it’s 2 – 2. I’m running and screaming all over the house again and into my street. And I am once more met by the sounds of the chorus of erupting houses. I kiss my Scotland flag and run back into the living room.

Soon after this Beckham gets sent off and from there it appears to be cigar time. For the first time since I had opened my eyes that very morning I was feeling calm and relaxed. But it is not long before I am crying hard again. Sol Campbell scores a header from a corner and it is apparently 3 – 2 to the ten men of England. And I’m planning what I won’t be eating and who I won’t be talking to for the remainder of the month. But then my dad tells me ‘’They’ve disallowed it’’ and I’m all of a sudden laughing harder than I was ever crying.

The penalties were a bit of a blur to be honest. Although I do recall doing two laps of Bonnyrigg high street with my Saltire flag covering my back in the form of a cape after David Batty missed the one that knocked them out.

And it is that, and everything else about that game, that are my most cherished World Cup memories. 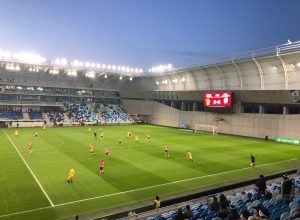