Hungary’s biggest festival The Sziget moves further & further away from locals & turns its noxious attention more & more towards the invading foreign hordes who descend on our city whenever August comes around.

Let’s get something out of the way.

I do however accept that it has long since sold its soul.

No such criticism can be made of Volt.

This is an authentic Hungarian festival where finding a foreign voice amongst the crowd is a thankless task.

I for one applaud that.

There is a real class time to be had in Sopron.

This writer made his first visit to Volt yesterday & I will be back.

After leaving Budapest & a relatively short two-hour drive later, my Dutch friend & I arrived in Sopron.

The festival site is tiny.

You can move around from stage to stage with ease.

Our first stop was the main area for some Skillet action.

A melodic Christian rock band hailing from Tennessee, they were interesting enough to keep us nodding our heads along for a few tracks.

We soon headed over to the LQ Thinq stage to catch up with Paddy & The Rats.

A mix between The Dropkick Murphy’s & Runrig, the crowd sung along in youthful exuberance as Paddy & co tore up the stage.

It was then time for a break & some refreshment.

A Soproni Demon or a Soproni IPA on tap will only set you back 650 Huf.

That is an incredible deal.

Neither of us were on the piss.

We were left to guzzle down Red Bulls, Cola & water.

Nothing wrong with that.

A non-alcoholic brew wouldn’t have gone amiss though.

They didn’t have any.

A fat slice of pizza helped to swallow our disappointment.

The main event was almost upon us.

When it was over we made our way into a huge mud pit at the front of the stage.

They were thirty minutes late.

England had been playing Belgium & they clearly Maiden were watching the game.

A huge Spitfire descended from the ceiling as the opening riffs of Aces High cracked through the night sky.

They were off to a perfect start.

Now I won’t claim to be a huge Maiden fan.

I heard enough of them coming from my big brother’s bedroom growing up to learn a few songs.

They have memorable catchy hooks that are perfect fodder for a live gig.

Nothing beats a thirty thousand strong crowd belting out a massive chorus.

After the spitfire had gone, the next stand out moment came with lead singer Bruce Dickinson’s poignant speech to introduce The Clansman.

No one could ever accuse Dickinson of being loquacious but his words were pretty moving.

The Clansman ain’t a tribute to the KKK. Instead it’s an ode to a Scottish tribe kicking an English kings arse.

I was on board.

The bands on stage antics were spectacular.

At one point, Bruce emerged with a flame thrower strapped to his back & arms.

He shot huge fireballs over the terrified crowds head.

He is the ultimate showman.

Dickinson, is backed by a five-piece colossal unit who know each other inside out.

Their two- hour set flew past.

The encore contained my favorite song of the evening.

The Evil that men Do.

Played with such hunger & zest (like every other track) as if it were just released yesterday.

The group may have their detractors but how many of these critics can say they’ve been at the top of the rock game for almost fifty years?

I’d hazard a guess at zero.

Maiden left the stage to Monty Pythons Always look on the bright side of life.

Even though we had a four-hour return journey home in the Hungarian rain, Volt & Maiden won a new convert last night.

I have a feeling I was not the only one. 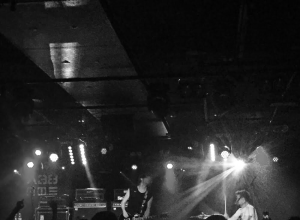