We are not in Russia.

I am writing this from my couch.

The first round is over.

Germany are on their way home.

In a few mere hours the last sixteen is underway.

For sheer drama this World Cup is incredible.

Pulse has been out & about in Budapest taking in all the action.

Find out where we’ve been watching:

There you ago & again.

Check out our favorite goals, games, flops, the shittest haircuts & a few other treats below.

Goals of the competition

You are in the last minute of injury time. Your country are seconds from being eliminated. A free kick is awarded. The angle looks almost impossible. You consider swinging the ball into the box. Your team mate convinces you otherwise. The pressure is unimaginable. Then. With one devastating swish of your majestic right boot, the ball explodes past the goalkeeper. An eruption of pure euphoria. Sadly, it will count for nothing. The goal however is unforgettable.

Messi of Barcelona & Messi of Argentina are two different people. One of them can conjure up exquisite moments of genius on a regular basis. The other is a forlorn figure, devoid of ideas. Frustrated. Unable to drag his team over the finishing line. Perhaps that is a little unfair. Not many football fans however would argue that Messi rarely delivers for his country. In this game he did. That first touch. Wow. It was otherworldly. All the energy of the ball, softened. The second touch he is away. The third. His shot is beyond Francis Uzoho . It was all a blur in real time. The reply our only confirmation of what happened. Let’s hope to see more of this Messi in the knock out’s.

Does he fit? That was the question Spanish supporters were asking before the competition kicked off. Diego Costa slotting in seamlessly to a slick passing side seemed unlikely. Again though. He has confounded his critics. This goal was classic Costa. He held off & wrestled the feckless Pepe to the ground. It seemed to take an age before the Atletico Madrid striker got off his shot. He knew exactly what he was doing. One emphatic strike slammed into the bottom corner later & Spain were level.

Is a great goal, still a great goal no matter the opposition? I’ll leave the Pulse readers to decide. This one though can’t be left out. Collecting the ball twenty-five yards from goal after a neat one two with Sterling, Lingard’s delicious curling shot was spectacular. The celebration? Let’s hope he never does it again.

The Best Games So Far

A thrilling spectacle. From a terrific Ronaldo hat-trick to the contumacious Diego Costa’s double, this had just about everything. With Spain’s manager being sacked a day before kick off the question was would they be focused & organized? The answer? Not really. Both sides were absolute wretched defensively. This only added to the drama. Spain stuttered through the group stages but they are still amongst the favorites. Who knows how Portugal will fare. They go from the sublime to the ridiculous (often in the same game).

The watching, Diego Maradona went through various stages of ecstasy, dejection & inebriation in this one. We all know how he felt. What a contest. Argentina are not a great team. They were very lucky to make it through after their lamentable display v Croatia. Nigeria missed two great chances at 1-1. Six-month fantasy premier league hero, Odion Igahlo conspired to waste them both. Marcos Rojo’s sweet volley was as unexpected as it was glorious. Argentina’s journey should end this afternoon. This however has been a World Cup full of surprises. Let’s see how they get on.

A game were Japan refused to concede defeat despite falling behind twice. This was quite breathless. Senegal took the lead through a comical goal. Eiji Kawashima ludicrous attempt to punch the ball clear instead ricocheted off Saido Mane to make it 1-0. Takashi Inui’s deft curler evened things up before Moussa Wague’s clever lofted finished looked to have sealed the win for the Africans. The land of the rising sun had other ideas. Another goalkeeping calamity this time by Khadim N’Diaye meant the immortal Keisuke Honda could tap home.

Ok. So, he’s an easy target but some of his decisions were utterly baffling. Leaving Leroy Sane at home didn’t make sense to anyone but Low. Sane’s precision, speed & guile were exactly what Germany lacked. After digging out that result v Sweden why did Low then reinstate the ineffectual Mesut Ozil & Sami Khederia to his line up? Why did he persist with the hopeless Timo Werner? A once great coach, Low will surely now be relieved of his duties.

A team crammed full of expectional talent such as Les Bleus should simply be playing better. They topped their group you say? And? I say. Denmark, Australia & Peru are hardly formidable opposition. France will be considered favorites to beat a lackluster Argentina in the last sixteen. In order to do that, they will need to produce a top performance. Do they have it in them?

A goal machine who suddenly stopped scoring when it mattered most. I know first-hand how deadly the Bayern Munchen hitman is. He essentially knocked Scotland out in qualifying with two predatory strikes. Poland expected. Lewandowski crumbled under the pressure. He will argue that his service was virtually non-existent. He’d have a point. However, a player of his caliber needs to inspire his country to better performances then what we saw.

Stars of the show

I like it. Sure. The game stops momentarily as the ref runs to a screen & we cut to a room filled with full kit wankers. In theory poor decisions should be a thing of the past. In reality, things don’t always work that way but would you rather Neymar got a penalty for his dramatic collapse in the box against Costa Rica? No? Me neither. VAR. Embrace it.

No one saw this coming. No one outside of Croatia anyway. Brushing aside Nigeria with ease. Dismantling a disorganized Argentina. Finishing top of the toughest group with a last-minute winner v a dogged Iceland. Croatia are fluid. Thrilling. Frightening on the break. They’ve been the team of this World Cup. Modric’s adventurous gallops forward, Persic’s relentless pressing & Rakitic’s ferocious finishing are without rival. Can the Vatreni go all the way? Perhaps. They are yet to face a true defensive test & Lovern is known to make the odd inexplicable error. What’s certain is. From the midfield on they are fearsome.

Rumors of his demise have been greatly exaggerated. He still has whatever – it is. We’ve already discussed the Real Madrid stars hat-trick v Spain. Portugal are labeled a one team & although that is not entirely fair, we can see why people might think that. Ronaldo is a true icon. His dedication & endeavor is the reason for that. He can produce the most stunning of goals from almost any area of the pitch. If Portugal are to advance past Uruguay then their captain will need to be firing.

From causing an earthquake after upsetting the Germans to storming the South Korean embassy the Mexican support is truly something to behold.

With their team on the brink of elimination the Argentine diehards really stepped up when they were needed the most. It was a blue & white invasion on Tuesday. St Petersburg didn’t know what hit it.

After being knocked out in the group stages, three little fans came to console their dad, Mick Milligan on the field . We teared up at Pulse. We did.

I am picking on him but that do looks like a stranger’s dumped a bowl of week old spaghetti on Neymar’s head. Get it sorted.

Your are not Leif Erikson . You did not discover America.So, why are you trying to look him? Give up.

Both Nigeria’s home & away shirt are completely sold out. The home one is nice but the lime green bad boy is beautiful. I am sad they are going home.

Blue & yellow. Blue & yellow. A real dazzling jersey. I’ve got a wee bit of a soft spot for Sweden. Celtic right back, Mikael Lusig can be seen starring for them in my position at right back. And there was a certain dreadlocked striker who I used to watch in The Hoops. As well as top players they are known to produce quality tops. This one is no exception.

Ok. There was a time when England wouldn’t get near any of my lists. I’ve mellowed out. I actually love the simplicity of this shirt. Why over complicate things when a plain white design can make the statement you need. Not a subtle dig. Seriously.

I suppose we gotta pick a winner of this damned thing.

I originally went for Germany (show’s what I know).

Now I am thinking we could see a surprise winner.

Croatia would be the obvious choice but my money is on Belgium.

Don’t ask me why. I just like the look of them.

Please disregard this article once Japan knock them out.

If you’re enjoying our coverage then go on.

We will be eternally grateful. 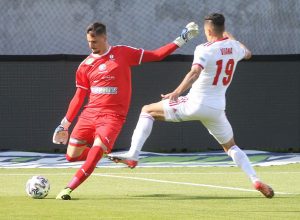