I’m going to be honest here.

She is a gay comic who grew up in Tasmania where it was illegal to be homosexual until 1997.

I’m a bit of a cunt when it comes to female comedians.

I don’t watch enough of them.

Not that they’ll give a fuck.

I doubt Amy Schumer is crying into here thirty million dollars pay cheque because wee Joe from Glasgow isn’t all over her latest film.

Another thing I’ve gotta be honest about is this:

I almost gave up on Nanette.

Five or ten minutes in, I’d seen as much as I could take.

Or so, I thought.

There is a turning point.

Gadsby recounts laying into a self-appointed LGBT spokesperson who critiqued the comedians show for not being gay enough.

Gadsby goes on to explain a terrifying encounter she experienced with a confused angry young bigot.

The bigot almost set about Gadsby for chatting up his pulchritudinous girlfriend before saying ‘’I thought you were a faggot. I’d never hit a woman’’.

We’ll get back to this angry young man later.

The adroit comedian reveals how absurd homophobia is.

Her ferocious, searing performance is filled with rage & weariness.

She’s had enough of straight white male privilege & as it turns out comedy for that matter.

At one point in the show she declares it is her intention to walk away from stand–up.

After telling us the disgraced Bill Cosby was the reason she got into the business in the first place, Gadsby gets all serious ‘’Do you understand what self-deprecation means when it comes from somebody who already exists in the margins? It’s not humility. It’s humiliation.’’

She’s literally taking a stand for the marginalized amongst us. It’s a beautiful & haunting speech. Delivered with heartfelt aplomb. It really resonates.

Now, Nanette has been somewhat polarizing.

There are those who believe it should not even be classed as comedy.

There isn’t an abundance of obvious jokes or punchlines.

For me, it works.

A scathing takedown of the privileged is perhaps long overdue in the comedy game.

A real bilious cast of characters.

A quick word on CK. He’s long been one of my favorite stand up’s.

I guess a lot of people did the same as me when news broke of his sexual misconduct.

I made excuses for him, tried to ratlionize his behavior.

In a word –I was an arsehole.

That’s four words. You get me point though.

Without being at the risk of sounding rebarbative, let’s just say I got it wrong on CK.

Remember I promised I’d get back to the homophobe who thought Hannah was a man?

Turns out he didn’t just walk away.

This by far is the most disturbing story I’ve ever heard by a comedian. There is no easy get out. No punchline to allow the audience to escape.

Gadsby is not done with us yet.

She chronicles being sexually abused as a child before breaking down as she tells us two strangers raped her when she was twenty.

‘’Fear difference’’ Gadsby says ‘’and you learn nothing’’.

The hour is almost up.

So, is it comedy?

I was interested in a comedian pal of mines thoughts.

Alan Henderson is tearing up Europe with his offbeat humor. This isn’t a plug by the way. I just wanted to get a working comedians thoughts on Nanette.

‘’ The whole ‘anti-comedy” thing would make sense if it wasn’t self-inflicted.  You don’t have to be self-depreciating. It’s not necessary that a comic talk about how they look, or their sexual orientation, or anything along those lines. What that is, for me, is someone getting caught up in what will make the crowd laugh rather than finding a way to engage in a way they want to. No one gives you a script in comedy – you make the jokes. If you don’t like them, change them.

This is great insight into Gadsby’s shtick. No one forced the comic to take any particular route. Her jokes are her own and she’s made a very successful career.

Perhaps she may argue that this was the only way she could make it in the game.

Whatever your thoughts on Nanette one thing none of us can deny that it’s an extraordinary show.

Nanette is one of the most memorable comedy specials in years.

You can watch Nanette on Netflix now.

Check the trailer below. 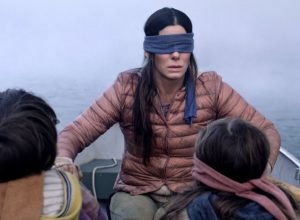