There is a new addition to Budapest’s city park. Tucked away on the far side of Varosliget next to Hermina Út, it took us several attempts to track the exact location of Budapest first dog adventure park. By adventure park I actually just mean a fancy dog run, but fancy it certainly is.

Designed as part of Varosliget’s current make over plans, the dog adventure park opened earlier this year and has taken off to be a huge success. Outdoing many of the other dog runs in the city in size and design, it is a great place for your four-legged friends to play and socialise in the safety of an enclosed area. The mostly grassed interior is separated into different areas by gravelled paths and carefully planted shrubbery. There is a larger open space designated for fetch, ball games and frisbee; two large sandpits for digging; assault obstacles such as slalom, tunnels and hurdles; but the highlight has to be the central pool complete with water fountains. Ok perhaps the water isn’t actually deep enough for swimming, unless you have the tiniest chihuahua, but it is great for keeping the dogs cool and hydrated, plus general entertainment for the canines and their owners alike.

So far, the park itself has been very well maintained, there is a gardener tending to the grass and greenery and a pool man – I kid you not – cleaning, sweeping and generally making sure the pool area is kept in tip top condition. The designers really have thought of everything, of course there are special doggy bins for their business and even showers so you can give your pooch a rinse down if they have had a little too much fun. Provided things stay the way they are, and dog owners keep up their side of the bargain making sure they clean up and look after their dogs, this new adventure park should remain one of the city’s dog friendly hotspots.

Szentendre: A guide for you and your dog

Why Dogs Are Good For Our Mental Health

Beyond Budapest: A Guide for you and your dog 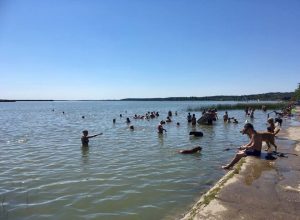 Lake Velence: A Guide for you and your dog