Not a craft beer for you this week folks, instead, a new offering from one of the Hungarian giants. Pécsi Sörfőzde are one of the big four brewers in Hungary, up against Heineken (who own Soproni), Coors (who own Borsodi), and Asahi (who own Dreher, Arany Ászok, and the Kőbányai range).

Although technically owned by the Ottakringer brewery, the company is managed and run as a Hungarian brewery, and their range is a cut above the multinational lager peddlers. Their Pécsi Sör Prémium Lager and unfiltered pils are both worth a try.

So when I spotted this new addition to the line-up in a fridge in my local CBA, I couldn’t help but pick it up and give it a shot.

And you know what, it’s not bad. At the price point, you’ll not find a tastier wheat beer in Hungary. That said, it’s not incredible either, and it has its faults. It has a sweetness that reminds me of Soproni’s alcohol-free effort, and there are moments when I wonder whether the taste’s been doctored chemically, and I get a whiff of those little foam banana sweets.

For its faults though, it’s eminently drinkable, and while Pécsi Sörfőzde are the smallest of the big four, and there are likely to be better options if you’re out and about it adds a little something to the line-up for the average Friday evening at home. 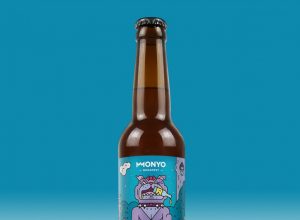 Tipple of the week: Monyo Schatzi