I am a Glasgow boy. Sixteen years old.

I hastily insert a black VHS tape (yes kids, they existed at one time) into the cheap video player in my bedroom.

The streets of Maryhill are abuzz with drunks, young & old offering each other a square go.

I block them out.

This moment had been months in the making.

I’d heard all about Trainspotting.

Everybody in my school playground was talking about it.

No one except the billy big baws (they were lying) had ever seen it.

The white television snow turns to black & then a thunderous beat fills the room.

From that breathtaking opening – I was enthralled.

Mark Renton (Ewan McGregor) hurtles down the streets of Edinburgh being pursued by two security guards from the old John Menzies.

He utters the now iconic “chose life” speech. I’ll save you the trouble of rehasing it here. I am sure you have heard it a million times.

That speech though still means so much to so many of us.

As for the film.

Adapted from the hilarious & terrifying novel of the same name by Irvine Welsh,  the story itself is very slight.

A group of Leith drug addicts rob, cheat & steal their way through the city.

Gripped by the junkie flu, Renton & his friends struggle to feed their habits.

The volatile Begbie (Robert Carlyle) lashes out at anybody that happens “to get in his fucking way”.

Out of them all, Tommy (Kevin McKidd) seems to have his shite together. Until he doesn’t.

A stash of heroin & two Russian sailors offer the boys a way out.

Despite (or because of) their troubles, I loved every one of this gang.

Like me they were working class lads from a poor & forgotten part of Britain. Their struggle was my struggle.

Since that night in my bedroom, I have watched Trainspotting countless times.

I’ve devoured & enjoyed every novel that Welsh has written.

These characters appear in several of his books (five to be exact) & it’s always great to catch up with them.

Trainspotting is where it all started. What we get here is a haunting cult classic that defined a generation & with the best soundtrack you are ever likely to hear.

In fact after I wrote this review, I stuck the film on my tablet (we could only dream of this shite back in 1996).

When the movie finished I promised I would not watch it again for at least a few years.

I knew I could never keep that promise.

All the info is here. 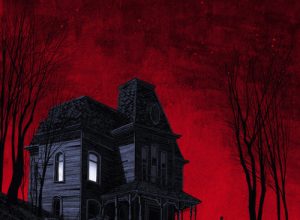