Our Better Call Saul preview dropped about ten weeks ago & you’ve not heard a peep from us since.

Well. You did. Just nothing in relation to Saul & co.

You know what I am getting at.

Season Four wrapped last week & we were dying to get in on the act.

The better than Breaking Bad articles are already out in force. I can’t go there but you do what you gotta do (A free trip to Belize to the first reader who can tell us where this reference is from).

BCS is an incredible show. This season has been the best yet.

Is it superior to Breaking Bad? It’s impossible to answer that question. Not now anyway. Breaking Bad is easily one of the greatest television series ever made. That show ran to essentially six seasons (season five was broken into two halves).

That being said. Whether you are Team Walt or Team Saul -you’ve gotta love BCS.

In the last ten episodes, the real Saul Goodman has stood up. And how.

This season ends with Jimmy transforming before Kim’s (the terrific Rhea Seeborn) & our very own eyes into The ABQs most dodgy attorney. Quite a few people have been lamenting this fact. They are saddened that Jimmy (Bob Odenkirk) seems to have lost his grip & is now in full Saul Goodman mode. Isn’t there an argument to be made that this was always going to be his fate? (Yes of course we already knew that).  Jimmy has always been a grifter at heart. In one sense played different characters for a very long time. Saul is just the most fun of the lot. I can’t wait to see what he gets up to.

Speaking of transformations. Mike Ehrmantraut (Jonathan Banks) goes through a hell of a change in this season. After finding a group of German engineers to build Gus’s meth lab, Mike bonds with their leader Werner. During the dig, Werner absconds betraying Mike’s trust & despite the ex-cop’s best efforts he ends Werner’s life with a gunshot to the back of the head as the German tries to get a look at the New Mexican stars.

Now let’s discuss what I will call The Salamanca problem. Is it just me or are these guys pretty shite characters? Well apart from Tuco & Hector. The cousins are wordless terminators who can shoot up Albuquerque in broad daylight & not come to the attention of the police. In this humble writer’s opinion, they were one of the worst things about Breaking Bad. Lalo is slightly more tolerable. However, his pursuit of Mike & Werner was pretty fucking boring. We get it. The Salamanca’s are badasses. A little more nuance is needed to make them interesting though. Just my two cents. Also, don’t get me started on the ceiling scene. Please.

That aside, what we have here (again) is ten hours of quite remarkable television. The scholarship candidates. Jimmy hitting the streets to sell mobile phones outside of Jesse Pinkman’s favorite fast food joint The Dog House. Werner’s breathtaking death march. Abba bringing Chuck back from the dead. We’ve had unforgettable moment after unforgettable moment.

Where BCS goes from here is anyone’s guess. Lalo will undoubtedly be wreaking havoc in the coming season. Will we finally get to see Walter White & Pinkman make an appearance. Do we want to?

All these questions & more will be answered come (we hope) 2019. In the meantime, do as I did. Put on Breaking Bad season two episode eight. Badger needs a lawyer & guess who the boys hire? ‘’You’re goddamn right’’. 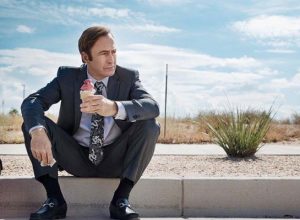