In honor of St. Andrews Day, we at Pulse are celebrating by bringing you a  heavyweight Scottish tipple.

That tipple of course is Belhaven’s Twisted Thistle. An American Style IPA.
More on the twisted later.

In the meantime, I am sure that everyone wants to know a little more about St. Andrew?

Probably not but I am going to tell you anyway.

The thing is – he never actually visited Scotland. Confused? Don’t worry. Everything will be revealed below. Sort of.

Andrew, was one of Christ’s 12 disciples (we will leave the religion debate for another day).

So, why is a guy who never set foot in our country Scotland’s patron Saint?
Well – the story, I like best goes like this.

Andrew appeared before The Scottish King, Oengus II in a dream the night before a battle. Oengus would lead his men in a fight to the death against Athelstan’s Angles. Andrew promised that the Scots would be victorious. This happened in the 9th century.

On the morning of the clash, a saltire symbol appeared in the sky. Oengus was inspired. He felt this was divine intervention. Oengus & his outnumbered men defeated Athelstan.

The saltire would go on to become a part of The Scottish flag.

Now that the dubious history lesson is over, let’s get onto the beer.

The Twisted Thistle is a very easy going 5.6%.

It is crisp, hop forward & unique.

The thistle reminds us Scots of home.

For the rest of you, I promise you’ll love it.

You can find the brew at The Caledonian, Budapest’s premium Scottish pub.

It is available on tap & by the bottle.

This writer has spent many a night in The Cale with a pint of this stuff, surrounded by old & new friends. 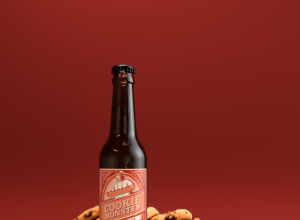