AGGI is an singer/songwriter/guitarist who has taken the Budapest pop & rock scene by storm.

In an exclusive interview Pulse caught up with AGGI for a quick chat.

Here, Hungary’s next big star discusses how she is already big in Japan, making it in the music business & where she would travel to if she had a time machine.

Let us know about your background. Where did you grow up?

I grew up in a small town, Gyomaendrőd. We moved to Budapest with my mom and my siblings when I was 14.

Were you a child of the CD or did streaming services already exist at that point?

The very first time I got interested in music I started with my Walkman and cassette tapes. Not long after that came the CDs. Streaming services were not popular at all when I was a kid.

What did you grow up listening to?

Metallica was the first band that really got me into rock music, after that I listened to all these big rock ‘n’ roll bands like the Aerosmith or Bon Jovi. Now I listen to everything, I’m not into only one genre anymore.
Was there a specific moment you decided that you’d love to be a musician?
Probably when I got my first guitar. I was about 12 years old. I liked singing anyway, but with the guitar in my hand I felt like I actually wanna do this.

You have a show coming up with the ubiquitous Paddy & the Rats on December 14th. Excited?

Very. I find it a great opportunity to support this band and play in front of their audience. (Pulse readers can get tickets here)

What is the Hungarian music scene like for a relatively new artist like yourself? Is it difficult to break into the business?

It is difficult, especially as my songs are all written in English. It’s not that easy for people to relate to the songs right away this way. Still, I always get a positive feedback whenever I release something new, and I’m always getting new and better opportunities so I’m on the right path.

Am I right in saying that you host a music show on Japanese radio? How the hell did that happen?

Yeah, that’s right. My guitar is produced by a big Japanese brand, Guyatone. This is how it all started, they recognized that I was using their guitar, so we got in touch. First, FMrara just played a few of my songs, and I sent one message to them. And then I was told that people were interested in what I was saying so I got offered a regular slot. So, I send a show every month now, which is pretty cool.

How would you best describe yourself? Are you punk? Punk/pop? Rock? Or a little of everything?

Yeah, I’d say it’s a little of everything. I don’t really wanna put myself into one category, or one genre. My songs are different from each other in their own way. One of them is a real pop punk hit, the next one is more pop, or rock. I find it important to discover more sounds in music.

If you had a DeLorean & could go back to see any gig, which show would it be & why?

I think I’d go back to the 1969 Woodstock festival. So sad that I had to miss that.

When you aren’t making music how do you like to keep yourself busy?

When I’m not playing music I’m usually still playing music. Coming up with ideas, or just practice a random song. But when I really wanna chill out, I might just watch a movie, read a book, hang out with the family and friends.

Inspirations? Who are they & why?

I’d say P!nk is my biggest inspiration. She’s the kind of artist who can always show something new. She’s not only one of the most amazing vocalists ever, but also writes her own songs which I find really great, I always respect that. But then again, I could say many names, Kurt Cobain, Lily Allen, Janis Joplin etc.

The strangest thing to ever happen to you is?

I was asked to do a radio show in Japan: D

My favorite album of all time is Alligator by The National. What’s yours?

Budapest is one hell of a city. Where do you like to hang out?

I like smaller bars. I don’t like places that are too crowded. I used to go to a lot of parties and concerts but now I prefer places where I can hang out with my friends and have a chat.

Not the Girl will your debut album. Tell us a little about it?

On Not the Girl I’m talking about a lot of different subjects. The main focus is on the fact that I am my own person, and I don’t want people to tell me what to do and how to do it. Still, people sometimes misunderstand who I am and what I’m trying to say. It is actually a good introduction for people to understand who I really am.

All the links you need to find AGGI on social media are here:

‘I always fight for what I want, and I don’t give up on things’: AGGI Interview 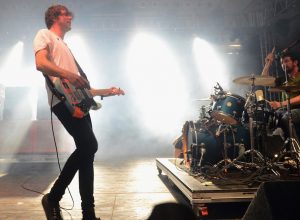 Joe McCann - 26th June 2018
We use cookies to ensure that we give you the best experience on our website. If you continue to use this site we will assume that you are happy with it.Ok