I am not going to try & pull the wool over your eyes.

I knew nothing at all about Brewski until last Saturday afternoon.

These guys hail from Helsingborg, Sweden.

After a smashing Rabbie Burns night of drinking whiskey & IPA with my pal, Mark (you might remember him from this piece), I headed to Beerselection to pick up some brews.

We were to have one of our legendary craft beer get together’s, so I needed some ammunition. This time it was me, Mark and another great friend Dave.

Back to Beer Selection. I had been tasked with picking up some IPA’s and stouts.

Brewski’s, Do I have a contact in Moscow? immediately grabbed my attention.

The bottles label reminded me of The Lost Cosmonauts – I am not sure if that was deliberate on part of the Brewski fellas.

For those of you who don’t know & probably don’t care, the lost cosmonauts are a group of astronauts who allegedly went into space before Yuri Gagarin & never came back. So, it is a tinfoil hat conspiracy theory, but it is one hell of a story.

Could the beer live up to the hype?

Do I is a double dry hopped IPA.

Brewski know what they are doing.

This IPA is crisp, intense & packs an incredible explosion of hops.

A bitter citrus leads the flavour.

It’s a complex, tasty beer that will have any craft brew head going nuts.

A 330 ml bottle will set you back about 1500 Huf but it’s worth bankrupting yourself for.

Do I have in Moscow was our third last brew of the craft beer night.

I sat drinking an exceptional IPA on a frosty Budapest Saturday evening with two of my best pals in the World.

What could be better than that?

Hey! Hit us up on social media! 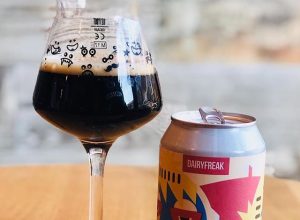