I took a solo trip to the Bozsik Stadion to watch this NB 1 Hungarian league match on Saturday. There was one small problem. Nobody was at the stadium and its gates were closed just thirty minutes before kick off.

Almost nobody. Luckily for me, there were three Germans who made the same mistake. No, we did not mistake an away game for a home one. The game had just magically changed venue, to the Hidegkuti Nandor Stadion, obviously. After painfully trying to pronounce this famous 1950s Hungarian forward’s name, we split the taxi and arrived at the right stadium five minutes before kick off. Two minutes and 2000 forint (£5.50) later, we were in our seats for the first whistle. At least I’d found some company…

Goals, No Girls and Megaphones:

The game itself was full of dramatic moments even if the standard of football generally made the match a little dry to watch. Hungarian football matches are typically tight and low scoring, so my expectations were naturally set low. However, two goals in the first twenty minutes, a second half comeback goal and two red cards gave me very decent value for money.

To be honest, I had chosen Honvéd to watch in the hope of seeing David N’Gog play, but it was the man keeping him on the bench, Filip Holender, who raced his team into an early 2-0 lead. The young Hungarian striker showed impressive finesse and finishing to latch onto a poor Puskás backpass and bury his low shot past the goalkeeper in the seventh minute. Ten minutes later another sloppy Puskás pass was intercepted and Holender found himself on the end of a pinpoint cross to tap in from three yards.

It is safe to say the Honvéd faithful enjoyed their team’s fine start. It did not take long to see where the most faithful of the faithful were sitting. These ‘ultras’ were possibly the most Hungarian looking men I had ever seen (I say ‘men’ intentionally because of their apparent anti-female code). They were suited and booted in a strange combination of red and black Honvéd hats and military camouflaged jackets for the most part, although they did little to blend in quietly. There were similarities to English hardcore fan sections like the Kop for example – they had their flags and a couple of drums for good measure. The most entertaining difference in this stadium, though, was that the Hungarian ultras were only fifty strong and their singing was conducted by two red Mohawk-baring men with megaphones. I was not able to understand much of the chanting, naturally, but I did enjoy the Honvéd rendition of “Freed from Desire” – although I don’t think they were singing about Will Grigg.

While the football was eventful, not every minute was gripping. Luckily I was spared from being that strange supporter drinking alone having stumbled across the German guys. The beer was cheap but the snacks were more interesting, and very typically Hungarian. Zsíroskenyér was the most popular food on the menu. This basically consists of a slice of rustic toasted bread spread with pig’s lard and Hungarian paprika (a delicious staple of 99% of the country’s dishes). It might sound like a basic variation on buttered toast but it was a good purchase along with a pint of the classic budget Hungarian lager, Soproni. The only problem came at halftime when they ran out of Soproni, the only alcohol on offer, to the disgust of every camouflaged Hungarian man in the stadium.

Overall, the facilities were good. The Hidegkuti Nándor Stadion, which is usually the home of MTK Budapest, is a modern 5000-seater stadium built in 2015. Having only two opposite facing stands, the seats were all very close to the pitch, which looked like a great surface to play on. The toilets and bar were both brand new and I got the impression that I was being treated to an untypically clean and modern Hungarian match experience.

Ripped Shirts and a Ruined Comeback:

After our halftime escapades, Puskás Academy, named of course after the prolific FerencPuskás, did little to fight back, well at least not in footballing terms. There were not many quality players on the pitch, especially not on their side. However, they were given hope in the 75th minute when their striker, András Rado, scored to set up a nervy end to the game for Honvéd. Puskás might have had a real chance too, had they not stupidly been reduced to 9 men. The first came when Albanian midfielder Liridon Latifi, a second half substitute, received a yellow card for a late challenge. Instead of accepting it and helping his team find an equalizer, he objected to the referee’s decision so much that he received an immediate second yellow for dissent. It probably was not his finest thirty minutes; shown by the way he ripped his shirt off and stormed down the tunnel, much to the amusement of the Honvéd megaphone holder. The second red in the last minute was purely out of frustration probably because Puskás knew they were not good enough to get a result.

In general, the football was very physical, and it did not suit a flowing, passing style of play. The central midfielders were bullish, workhorse types and there was not much creativity on the pitch. I lost count of the amount of long balls played over the back four for big physical strikers to chase. It reminded me a bit of the English non-league games I have seen. Perhaps this was why David N’Gog was only brought off the bench for the last five minutes and barely touched the ball. Although it was not the type of game to suit his style, it was definitely an eventful one. As long as you stay away from making too many comparisons to the English football we are used to, I’m sure you’ll find Hungarian football an entertaining watch. 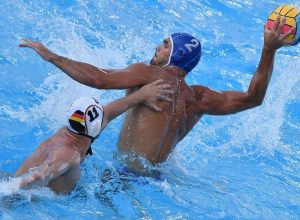