This tipple was meant to drop last week.

The notes were written.

The featured image was ready.

The date & time were set.

And then the accident happened. I mentioned that in Wednesday’s piece.

I won’t bore you with the details.

So now here we stand. On this glorious Friday evening.

Your tipple of the week is none other than Dairy Freak from Magic Rock.

The Magic boys have been busy in the last couple of weeks. Lion Food & Beverages bought a 100% stake in The Rock.

Some craft brew snobs lost it.

After all, Lion is home to such brands as Becks & Stella.

Me? Me I am not too fussed.

There will be more Magic Rock for us all, so what’s not to like?

We covered these lads & lassies way back last March. Cannonball was in the spot light then.

Let’s talk a little about The Dairy Freak, shall we?

I got my hands on a can of this stuff a few weeks back.

After a particularly heavy Friday night out, I woke needing something to get me back in the game.

My girlfriend & I, headed out to our favorite spot Hopaholic.

After an IPA, I wanted to end my evening early with a stout or a porter.

In Hop you are always in good hands. Their bar crew consisting of the two Balázs & Peter know their beers.

I asked one of Balazs lads what was good.

He ducked into the fridge & came back with a freezing cold can of Dairy Freak.

Now the first thing you will notice with this beer is the colour. For some reason I expected it to be white. Now call me naïve (since it was a porter) but I was imagining a glass of ice cream. And correct me if I am wrong but vanilla ice cream just happens to be white no?

Alright I am not getting out of this one, but you know where I am coming from.

Both the brewery & the ices hail from sunny Huddersfield.

That’s in the North of England for those of you who don’t know.

You’ll be wanting to know how the beer tastes right?

Well it is exactly like a 99 vanilla ice cream cone.

What’s more at 5.2% abv you can drink gallons of the stuff & still be standing.

My go to dark brews tends to be over 10%  – this made for a nice subtle change.

Dairy Freak really is a porter like no other.

Hit us up on social media. All the links you need are below: 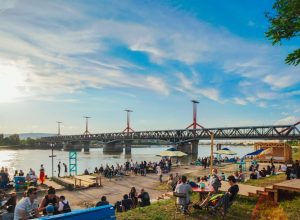 Under The Bridge: Valyo Kikötő Review

Joe McCann - 3rd July 2018
We use cookies to ensure that we give you the best experience on our website. If you continue to use this site we will assume that you are happy with it.Ok