That’s how long we have all had to wait for Game of Thrones to return.

In that seemingly endless wait, GOT fever gripped us all.

Some of us enjoyed devouring spoilers. Whilst if you were like me you hid from anything Westeros related until the new season dropped. Well apart from the trailers.

I came to Game of Thrones a few months after the first series ended.

My Dutch friend, Kev introduced the show to me. We sat in his living room down by Petőfi Hid & hurtled through all ten episodes over a couple of days.

I was in utter shock when Ilyn Payne took Ned Stark’s head. It is fair to say I had never seen anything like it. Ned (the hero of our story) death is jaw dropping & completely unprecedent in modern television.  You do not kill off your main character with the season not yet over.

For the years to come, Game of Thrones continued to shock & enthrall. These were not well-worn fantasy tropes being explored.

Then the inevitable happened. With George R.R. Martin unwilling to complete his Song of Fire & Ice saga (8 years & counting for the Winds of Winter) the show overtook the book. The GOT creators, Dan Weiss & Dave Benioff were then left to their own literal devices.

Although still pretty good,Game of Thrones has suffered considerably since it ran out of book material. Season seven was arguably the worst of the lot. From the preposterous plan of kidnapping a Wight to The Iron Bank siding with Cersei (just because), the show lumbered from one ludicrous set piece to another. Not forgetting that the Games most adroit player, Lord Peter Baleish allows himself to be executed without so much as a whisper of ‘’I demand a trial by combat.’’

Now we have eight.

After watching the first three seasons of the show, I finished all five Song of novels in one summer. ”I read them years ago. So, don’t tell me about Jon Snow. Cause I already know. Got a signed copy of A Feast for Crows.” A wee in joke there. It only works if people know what I am going on about right?

They are incredible books. Works of an absolute genius. It is little wonder that GOT is not the same without that source material.

However, to argue that this show is not a cultural phenomenon though would be churlish in the extreme.

I like everyone else could not wait for season eight to get started.

After leaving the office, I jumped on my road bike & rushed home, fighting off traffic & other riders who undoubtedly had a date with HBO waiting for them.

Bursting through the door of my flat, I was greeted with a gorgeous dinner my girlfriend made in anticipation of GOT. This series is an event in most Western households.

We sat down to eat as the iconic main credits theme played.  I adored the new opening sequence as we got to take a trip inside Winterfell & The Red Keep.

As for the episode itself. Well – it was something of a disappointment. I mean it had to be right? After all that build up. All that anticipation.

The opening episode of most Game of Thrones seasons is about place setting. I get that. However, this is not like most GOT seasons. After the screen turned black & the credits appeared there were only five more episodes to go. Five.

‘’We don’t have time for all of this.’’ Those are Bran Stark’s words after Daenerys & Jon Snow ride into Winterfell.

I couldn’t help feeling that the three eyed raven might have a point.

Anyway, as with most episodes there are as always some terrific scenes to grab our interest.

“The last time we spoke was at Joffrey’s wedding. A miserable affair.” Tyrion quips.

“It had its moments.” Is Sansa’s curt reply.

Jon & Arya are reunited after over seven seasons apart. It is a wonderfully heartfelt scene.

The question of when Jon’s identity will be revealed to him is answered by Sam. Jon who has always struggled with being a bastard is now (at least in theory) Aegon Targaryen. Whether or not he will embrace his new identity remains to be seen.

In a chilling twist, Beric Dondarrion & Tormund discover the gruesome sight of Lord Ned Umber being reanimated after a visit from The Night King. The young lord’s subsequent death by fire is reminiscent of the lair scene from Aliens.

Bronn (who should have died a long time ago) is given the unenviable task of taking out The Lannister brothers, Jamie & Tyrion, “That fucking family.” Another gripe with season seven is if Cersei wanted Jamie dead wouldn’t it have made sense for her to do so when he was in Kings Landing & about to desert her?

Perhaps the finest moment of this episode is Jamie arriving at Winterfell. He is met by a wheel chair bound Bran. These two have not seen each other since Jamie pushed Bran out of a window in the very first episode of GOT. The two exchange a look. The Kingslayer is no longer the man he was. Bran is no longer even a man.

I was expecting more. However, the wars to come will be epic. Won’t they? Won’t they?

Game of Thrones season 8, episode one is available to watch on HBO Go Hungary now.

Check out the trailer for the season below.

Hit Pulse up on social media.

All the links you need are below: 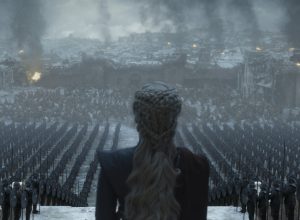 HBO Most: Game of Thrones, The Iron Throne Review