On May 4th 1949 an Italian Airlines Fiat G. 212 carrying the famous Grande Torino side crashed into the retaining wall at the back of the Basilica of Superga killing all 31 passengers and crew on board.  One of the men to perish on that fateful day was the Hungarian coach of the team, Erno Egri Erbstein.

Even for close followers of the Hungarian game, the name of Egri Erbstein does not automatically spring to mind when thinking of the footballing greats that Hungary has produced over the years; usurped by the likes of Puskas, Kubala, Grosics, Guttmann and co, fame has eluded Erbstein’s memory.  Until now.

This coming June, Erbstein’s first club, the recently reformed Budapesti Atletikai Klub (BAK), are hosting a tournament in his honour.  The two-day event over the weekend of the 15th and 16th June will take place at Szonyi uti Stadion, the home ground of BVSC (Budapesti Vasutas Sport Club), which is situated close to the location of the original BAK stadium, where Erbstein would have played.

Among the clubs invited to play at the inaugural event are the famous English amateur outfit Corinthian-Casuals who have struck up a lasting bond with Budapest dating back to 1904 when the English side visited the city on their first European tour.

Born into a Jewish family in 1898, Erbstein spent the majority of his modest playing career with BAK and was described by Bertalan Molnar, current chairman of BAK, as a rugged and uncompromising midfielder.

However, it was in Italy that Erbstein’s career would flourish and his legend was established.  He first moved to Italy in 1924 and remained there until the outbreak of World War 2 when he was forced to leave the country under Benito Mussolini’s Fascist rule.  During his time in Italy, Erbstein played for and coached several clubs and was noted for his innovative approach to the game.  His last club before leaving Italy was Torino.

Returning to Hungary and Budapest, Erbstein was met with the full force of the horrors of War. In 1944, after the occupation of Hungary by Nazi Germany, Erbstein and his family – like all of Hungary’s Jewish population – faced persecution and racial violence during the Hungarian Holocaust.  As Dominic Bliss notes in his excellent biography Erbstein: The Triumph and Tragedy of Football’s Forgotten Pioneer, at one stage 12,000 people were being transported from Hungary to Auschwitz every day.

Budapest was to be spared this particular horror until last and, as a result of international outcry, the transportations were delayed. Instead, Erbstein was forced to report to a Labour Camp while his wife and daughters sought refuge in the Catholic Katalin Convent.

With resilience, resourcefulness and no shortage of good fortune, Erbstein and his family survived the War and Hungarian Holocaust and eventually returned to Italy where Erno would reassume his position with Torino and help develop the much revered Il Grande Torino side who would dominate Italian football in the late 1940s.

In May 1949, at the height of Il Grande Torino’s success, the club was invited to Portugal to play in the testimonial match for Benfica captain Francisco Ferreira; a match the hosts would win 4-3.

After the match, Ferreira was honoured with an official dinner at which the Torino players and representatives presented him with a generous retirement purse.

The following day, they boarded their flight home.  A journey they would not complete.

70 years have passed since the Superga Disaster, yet the memory of those young men who tragically lost their lives on May 4th 1949 lives on.

In the summer of 2018 BAK reformed after an absence of 72 years, thanks in no small part to Bliss’ book which helped raise the profile of Erbstein in his home country.  This summer, to mark the 70th Anniversary of Erbstein’s passing and the reformation of his old club, the inaugural Egri Erbstein Tournament will take place.

It is set to be a fitting memorial to one of Hungarian football’s unsung heroes and I implore you to free up the weekend of June 15th and 16th in your calendar’s and come along for a weekend of real, honest football.

When you are finished please hit Pulse up on social media: 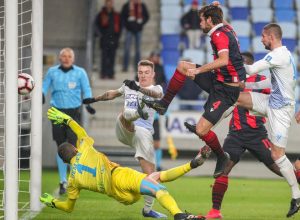