At approximately 6pm this coming Saturday at Ferencvaros’ Groupama Arena a little bit of history will be made.  As, for the first time, Budapest will play host to the UEFA Women’s Champions League final between Lyon and Barcelona.  It will also be the first time that UEFA has split the host city for the men’s and women’s finals, giving both events a separate host and helping to create a unique identity for the games.

Defending champions Lyon will go into Saturday’s showpiece match as favourites.  The French side has won title competition a record five times and has an apparently impervious grip on the trophy having won it in each of the last three seasons.

Among their ranks, Lyon can boast the current Ballon d’Or Feminin holder Ada Hegerberg.  The young Norwegian who skilfully dodged Martin Solveig’s misjudged “do you know how to twerk?” comments at last year’s Ballon d’Or ceremony, has an eye for goal having notched over one-goal-per-game in all competitions this season.

Not only will Lyon be favourites on paper, but they will surely also be the crowd favourites as well thanks, in no small part, to the presence of midfield playmaker Dzsenifer Marozsan who, despite representing Germany at International level, was born in Budapest.  Indeed Marozsan’s father, Janos, was capped on four occasions by the Nemzeti Tizenegy in the early 1990s.  Marozsan will, therefore, be looking for the dream homecoming and the addition of a third Champions League winner’s medal to her personal haul.

Despite the odds, and potentially the crowd, being against them, Barcelona Femeni is not a proposition that should be taken lightly.  Ranked 2nd in Europe behind Lyon, the side from Catalunya will feature in their first ever Champions League final on Saturday.  In their ranks is the extremely talented English forward Toni Duggan whose 5 goals thus far have helped propel Barcelona to the Budapest finale.

Interest in the women’s game on a Europe wide level is on the increase as record attendances for games this season in Spain, Italy, and the FA Cup final in England can testify.  It, therefore, comes as no surprise to find out that Saturday’s Cup final is a sell-out event, with 22,000 spectators set a treat of top football action.

The only question that remains is whether we will see Lyon’s dominance continue, or a new name, that of Barcelona, written on the trophy.

After your done, follow Pulse all over social media: 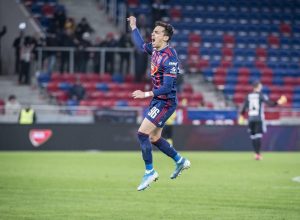 FEHEREVAR KEEP THE PRESSURE UP