Game of Thrones is no more. 73 hours of television, 3500 deaths & eight years brought us here.  The shows final episode aptly titled The Iron Throne aired last night. This writer watched it this morning.

The Iron Throne is gone – forged by dragon flame after Aegon Targaryen, conquered Westeros three hundred years before A Song of Ice & Fire. Now the very thing his mother sought since her birth is destroyed by Drogon in a fit of fiery Rage.

Queen Daenerys of the House Targaryen, the First of Her Name reign is the shortest in the Kingdom’s history. A beleaguered Jon Snow plunges a blade into his lovers’ heart as the two embrace.

George RR Martin has spoken for years of ‘a bitter sweet ending’. Most of we (smug) book readers always believed that meant that Jon would be ‘forced’ to kill Dany after she had gone full Mad Queen.

Before her death & after becoming queen of the ashes, Dany stands over a burning Kings Landing & tells her Unsullied & Dothraki ”You kept all your promises to me. You gave me the seven kingdoms.”

Jon & Tyrion look on in horror. The Imp resigns as Hand of the Queen & is imprisoned.  Jon must be convinced to rid Dany from this World ”Everywhere she goes evil men die & we cheer her for it. And she grows more sure that she is good & right.” Tyrion’s impassioned speech is clearly aimed at the audience. Jon recalls Maester Aemon’s words ”Love is the death of duty” & he trundles off to do his.

Dany is mad & the show will do everything in its power to convince you of that. So, what of this turn? Is it earned? Season eight of Game of Thrones has been somewhat anathematic. For the most part  – it’s been despised. I didn’t hate it. I was on board with the season & the show.

Now there will be those of you who will argue that Dany was always heading down this path of maniacal destruction . She burned alive Mirri Maz Duur. The witch who murdered her husband & child. Viserys is given ”a crown for a King” & Dany does not even flinch. The same Viserys who sold his sister into slavery apparently deserved more than a cold ”He was no dragon. Fire can not kill a dragon” in response to his death. The House of the Undying is burnt to the ground. I mean the Warlocks had only wanted to hold Dany & her dragons in bondage for thousands of years. She executed the slavers of Astapor & 163 masters of Meeren. Dany burns all The Khals in Vaes Dothrak. The Khals who moments before threatened to rape & kill her. Her one truly questionable decision was to kill Randyll & Dickon Tarly. Both men refused to bend the knee & had taken arms against her.

A Song of Ice & Fire is a ruthless World. Other beloved characters have committed horrific acts. Jon Snow hung a child. Tyrion set ships ablaze with wild fire. Arya fed Walder Frey his own children. Jamie pushed Bran from a window & beat to death his own cousin. Robb Stark sent 2000 men to die at Whispering Wood & later beheaded Rickard Karstark.  The Hound rode down & slayed ”the butchers’ boy.” Sansa set a pack of dogs on Ramsay Bolton. You get the point.

Up until she burned alive innocent men, women & children in Kings Landing, Dany’s actions were for the most part justified. A little more than a few episodes ago, Dany had fought valiantly, nobly & honorably on the side of the living against The Night King & his army of the dead. Two episodes later & she is killing innocents? Aye right. The problem isn’t that we got here  – it’s how we got here.

When series six ended in June 2016, GOT’s showrunners made the inexplicable decision to produce two more truncated seasons. In a show were bad calls could ultimately lead to your demise, even ”old dead Ned” would not have made this choice. Thirteen more episodes was simply not enough time to flesh out the entire story.  Weiss & Benioff will probably come to regret their folly. The ending we deserved truly needed to pay off Dany’s descent into madness & her death.

After Jon murders Dany, Drogon carries her corpse from the Throne room & into the sky. Most likely he is heading to Valyria.

With The ‘Mad’ Queen gone a new monarch must be found. There is perhaps no more apt place to make this monumental choice than in The Dragon pit. The King in The North arises. Bran ”The Broken” Stark ascends to the throne. Tyrion will be his hand. Before all this can happen, Greyworm demands that Jon Snow pays for his crime of killing the queen.  Edmure (where did he come from?) makes a hilariously botched claim for the throne & Samwell Tarly is laughed down when he suggests true democracy is the way forward. (Sam does go on to break the fourth wall & help pen A Song of Ice & Fire.)

Sansa becomes The Queen in The North. Arya sets sail for uncharted land ‘What’s west of Westeros … no one knows. It’s where all the maps stop. That’s where I’m going.’ A spin off will surely be in the works for Arya & needle. Jon escapes execution & retakes the black of The Nights Watch.

Greyworm heads to The Isle of Naarth.

Perhaps the most touching moment during this episode is when Brienne of Tarth (newly appointed as the Lord Commander of The Kings guard), completes the unfinished deeds of Jamie Lannister in The Book of Brothers . He died defending his queen. Tears were almost shed at that moment in the McCann household. Almost.

Jamie’s life & story comes to a satisfactory close but what of the show?

With all the hype & the unrealistic expectation, it was almost certain that the last season of such a cultural phenomenon would leave all of us a little disappointed. Whatever way they went, people would have been unhappy. If you are like me, then you’ve spent hours watching the television show & months reading the books. You were invested in this story. It certainly was not the perfect season.

I did though love the final shot.

Game of Thrones ends as it began  – with men of The Nights Watch riding beyond the wall. Jon, Tormund & Ghost leave Castle Black behind & head out towards the truth North. Jon will never return. He rides his horse into the trees & disappears into the gloomy morning light as Ramin Djawadi’s luscious score stirs all around us.

We will never return to Game of Thrones again. Despite a season that disappointed that should still make us all a little sad. This show was truly like no other.

”The things we love destroy us every time, lad. Remember that.”

Check out the trailer for last night’s episode here:

When you are done, please hit up Pulse out on social media: 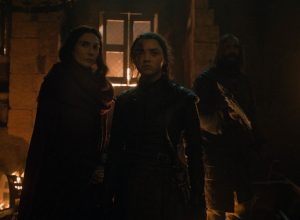 HBO Most: Game of Thrones, The Long Night Review