Back in December Pulse caught up with the Hungarian pop sensation, AGGI. With her new album about to drop, we felt it was about time for another chat. Get to know Hungary’s next music superstar in this exclusive interview.

So, AGGI. What you been up to since we last spoke?

Well, I was mostly busy with preparing my debut album ‘Not The Girl!’, so most of my time I spent in the studio in the past few months.

The album comes out on June 7th, right? What can we expect?

‘Not The Girl!’ is like an extended version of what you have heard from me before. The title song ‘Not The Girl’ is very personal, it’s about a subject that Is very relevant in my life, how people someone misunderstand who I am first, and they make a very quick decision about me, before actually get to know me, and that makes me pretty upset. And basically, the whole album is built around this idea of how I see the world and how I think the world sees me.

Can you talk about some of your favorite songs on the album?

It’s not easy to choose, because I love all of them, they’re all very close to my heart. Maybe ‘Stronger Now’, that’s one of those songs that just came out very easily, it was written in about 20 minutes. And maybe You F***ed Up (With you) because that’s just a really fun song.

Ok, now we have the low down on the album where can we get our hands on it?

You can find it on PopShop in Hungary, or on my website.

Talk me through how you go about creating a song? How does the writing process work?

It’s always a bit different to be honest. Sometimes there’s something on my mind and it just works very well, and the whole thing is just very quick. Sometimes I have to think more on the subject and the words. It also happened that I wanted the song to be about a certain something and then by the time the lyrics were written it was about a totally different story. I think it’s important to always write about something that is important for the person who’s writing it, and for the person who’s performing it, that way the whole song will sound a lot more alive.

Apart from your own music, what are you listening to on apple music/Spotify just now?

A little bit of everything, depends on my mood. I think the most recent are Billie Eilish, Fever 333, and Lil Peep. Very different artists, but all of them have something that just really gets me.

Following on from that what are your views on streaming services? Are they a good thing for a new artist?

That’s a good question. I think it has advantages and disadvantages. It surely makes it difficult to one person or band to stand out, as it has millions of users and performers. There’s a new artist out there every day, so the competition is big. Also, streams don’t earn as much as CD sells so it needs to be pushed in many different ways, so it actually works and earns some money. On the other hand, I find it great, that all these talented people have a platform where they can easily share their music, I think that’s pretty cool.

Can you recommend a must-read book?

Yes, sure, I’d recommend Lily Allen’s autobiography ‘My Thoughts Exactly’. I think it’s an important read not just to Lily Allen fans but all the new artists, especially girls, in the music business. She talks about her experiences, her difficulties, with no shame, and that’s the key part of it, that she stays very honest and straight about everything she’s written down.

What about a film? What’s your favorite?

That might be a cliché answer, but I love Forrest Gump, and I don’t think I could ever get bored with it. 😀

Back in December we talked about how your love of Budapest. How much of an influence does the city play in your music?

Before I moved to Budapest, about 10 years ago, I lived in a small town down in the Southern part of the country. Here I always felt like I’m freer and there’s a lot more opportunity for me. I think it changed me in many ways, and I couldn’t write the songs I’m writing without these 10 years in my life

If one of your songs could feature on a television show, which tv show would it be & why?

If there was ever a new season of ‘Friends’, they could all go to an AGGI gig. That would be fun!

Let’s get away from music for a moment. What’s the worst job you’ve ever had?

I was once working in a drugstore’s storage room wrapping little notebooks 8 hours a day. Like thousands of them. That was frustrating.

Say I am new to BP. Where should I go first?

If you wanted to hang out with me I’d take you up to the Citadella and check the view from there then we could find a cool ruin bar. But I like to be spontaneous, so you never know where we might end up.

When your life is made into a movie. Who is going to play you?

A young Jennifer Aniston. That would be rad.

Where can we next catch you live?

There’s a few dates in planning, no public ones yet, as I payed the most attention to the album.

Which artist would you most love to work with in the future?

Any plans for the summer? Are you off to any festivals or sunny climates?

I have a few plans. In June I’m visiting London, not so sunny, but there’s a few gig opportunities which I’d like to work on, and Frankfurt is in my plans too, which is also connected to the project, but I want that to be a surprise for later.

If there is one thing we should know about you, what is it?

I always fight for what I want, and I don’t give up on things.

Check out AGGI in action

Whilst there why not check out BP Pulse? 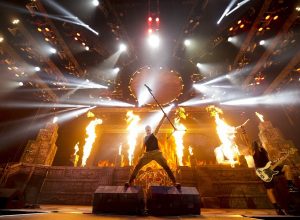