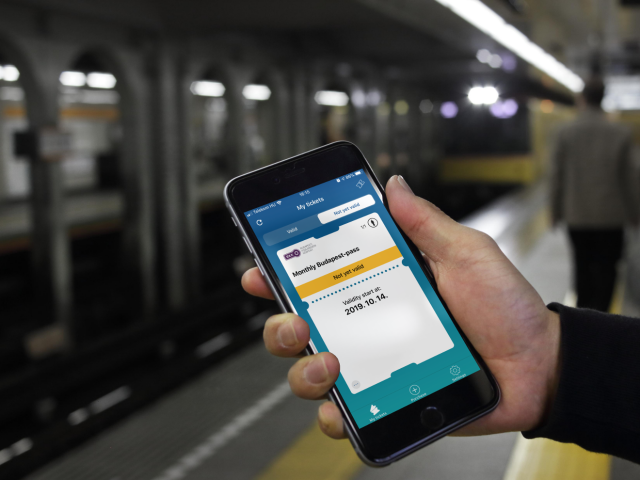 The much maligned BKK (Budapesti Közlekedési Központ, Budapest Public Transport Centre) operate buses, trams, railways, trolley buses, boats, funiculars, and even a ski lift. Given the complexity of their service offerings, it kind of makes sense that their ticket pricing structure is fairly simple: with a few exceptions here and there, one ticket is valid for one journey from start to finish, and costs just 350 HUF (1.05 EUR, 0.92 GBP), and a full price monthly pass can be had for as little as 9 500 HUF (28 EUR, 25 GBP).

But there’s always been a bit of a sour taste in the ticket ordering process. In London, for example, the Oyster card system allows you to tap in and tap out smoothly, using your balance which can be automatically loaded from your card. In Paris, you have the Navigo system – you have a similar card which you can top up online, or pay for with a monthly subscription automatically.

Here in Budapest, you have to physically queue up at a ticket office (or, more recently, ticket machine), and buy your ‘pass’ every month. The passes are non-transferable, non-replaceable, and are printed on flimsy paper about the same size as a credit card. You buy your pass and hope you don’t lose it, hope it doesn’t get stolen, and hope you remember your pass is expiring at the end of the next month to avoid risking the fine.

With the Mobile Ticket (Mobiljegy), BKK are taking a half-hearted step into the 21st century, allowing travellers to buy their passes online and keep them on their smartphones. The system’s still in its pilot phases, but it’s hard to see how this is going to work as smoothly as in other capitals – the payment system is the same tired OTP system used by other online portals (eg: Dijnet, Netpincer), and as well as being poorly adapted for use on a mobile, it doesn’t allow automatic payment renewals.

There’s also a lot missing in terms of the infrastructure, and the information around the app is not easily accessible. For example, it took me a few minutes hunting around to determine that I can use my ‘mobile ticket’ more or less the same as the physical ticket – unless it’s a ‘front door boarding’ service, or in case there’s an inspector at the metro entrance. In this case, I need to scan a QR code and present a mysterious ‘animation’ to the inspector or bus driver.

QR codes are already yesterday’s technology, and the benefits of technological improvements to public transport ticketing are often allowing fewer staff to manage a higher number of travellers by minimising the possibilities to abuse the system.

In Budapest, over 250 controllers work across BKK’s network, and a truly automated system could bring this number down significantly. However, this new app doesn’t really deliver on this promise, and given the huge investments made in automated fare collection in Budapest. I lost track of how many failed projects and false starts there have been, but it’s clear literally tens of billions of forints over the past ten years have disappeared down the drain, with the only tangible output being an app that feels a bit like a high school student’s final exam piece – it does what it’s supposed to, but lacks polish, and doesn’t go far enough to solve the problem it set out to achieve.

Nevertheless, it’ll shave a few minutes off my commute tomorrow morning, and maybe that’s enough for it to be worth it.

Lake Velence: A Guide for you and your dog