‘’Now we know where they are hiding Jimmy Hoffa!’’.

The disappearance and almost certain murder of union kingpin Jimmy Hoffa has enthralled and bemused law enforcement agencies and amateur sleuths for almost fifty years. There are so many theories of what became of the former President of the International Brotherhood of Teamsters. All of this conjecture has been allowed to flourish as the corpse has never surfaced. What is certain is that Hoffa and the Union were controlled and largely funded by the Mob. Hoffa’s involvement with Mafia figures was to lead to his ultimate demise. One of those underworld characters was Frank Sheeran. Frank was a hitman and enforcer for the Bufalino crime ‘family’. The Irishman of the title.

Martin Scorsese’s latest picture about the Mob is operatic, enthralling and also deeply moving at times. It is a glorious return to the mean streets for Scorsese. The Irishman certainly belongs in the conversation alongside Taxi Driver (for me, the best American film of the last 43 years), Raging Bull and Goodfellas.

The film starts in 1975 with Sheeran (Robert De Niro) and Russell Bufalino (Joe Pesci) driving across country for a ‘sit-down’ with Hoffa (a spellbinding Al Pacino). Pesci came out of retirement as a favour to Scorsese and this is his first collaboration with Marty since Joe was buried alive with his brother during the blood-drenched conclusion of Casino. He is superb as Bufalino. Unlike Tommy DeVito in Goodfellas or Nicky Santoro in Casino, Pesci’s Bufalino is a more measured individual. Russ is a businessman with a quiet ruthlessness which allows him to climb the ladder to head his own ‘family’. Russell and Sheeran reportedly met in the 1950’s when Frank was a trucker for the Union. The film primarily focuses on Sheeran’s relations with Russ and Hoffa.  The narrative spans close to six decades.

Despite Scorsese’s protestations over how and where the film should be watched, I personally viewed it over three separate nights on Netflix. How the general public consume their films has changed forever and cinema audiences have dwindled as a consequence. However, it is fair to argue that a film as long as The Irishman is more suited to being watched at home.

The final third of the film is more effective than the first two hours. It is evident from the tone that this is the end of Scorsese’s love affair with the gangster genre. I   am not ashamed to admit that I cried during the finale. Those tears were not shed for the unrepentant characters but rather for the wonderful actors who embodied them and how much their performances and films have meant to me. These actors are in their late 70s to early 80s now and they are not long for this world. They will certainly never all be on screen together again and I found that to be emotionally devastating.

De Niro gives his best performance since Heat. His excellent cameo performance in Joker suggested that he is keen to take on more challenging roles again. His film choices in the last two decades have been troubling to say the least. This embracement of mediocrity (Meet The Parents, Last Vegas, Silver Linings Playbook to name but three) and vulgarity (the lamentable Dirty Grandpa) would have irreversibly damaged the legacy of any other actor. Perhaps he just stopped caring. Marlon Brando’s closest friends asserted that The Godfather actor became morbidly obese (in an industry where image is everything) as an up yours to all the things he loathed about Hollywood. De Niro hasn’t hurt anyone by choosing such roles. However, for those of us who consider ourselves to be ‘serious’ connoisseurs (pretentious assholes) of cinema, it has been comparable to witnessing a former world-class prize-fighter working the door at a Las Vegas casino. It may not necessarily be a bad thing. It has just been sad to watch. The film is already generating Oscar buzz and it would be truly glorious if De Niro wins his third Academy Award, forty years after his last honour. There is an unforgettable breakfast table scene when Russ explains to Frank why Jimmy has to be killed. De Niro does not have any dialogue during this scene but the sorrow in his eyes is gut-wrenching. As a foot soldier, Sheeran knew that he couldn’t voice his disapproval of the planned ‘hit’ on his long-time friend. He had no choice but to participate. It is in such moments that you are reminded why De Niro is quite simply the greatest actor of his generation and beyond.

Sheeran’s silence in this moment is echoed by Anna Paquin’s near mute performance as Frank’s daughter, Peggy, for the entirety of the three hours and thirty-minute running time. This has again seen Scorsese having to stave of accusations of misogyny in his films. Such accusations are unjustified. The Mafia is a patriarchal society. Although there are strong female characters in Scorsese’s other Mob films, it is fair to surmise that the world that his characters inhabit is certainly controlled and dominated by men.

Many critics have also questioned the validity of Sheeran’s statements about the Hoffa killing. Sheeran also claimed to have supplied the guns that were used to kill JFK. So, his propensity for embellishment and ‘fantasy’ was large. However, it is not to be doubted that he was a very close friend of Hoffa and his role as Mob enforcer certainly gives credence to his claims. One thing we know is it was very unlikely that Sheeran killed Crazy Joe Gallo. If he lied about that, then chances are he could have lied about Hoffa as well. The truth is, we will never know.

The film is a technical marvel (aren’t all of Scorsese’s films?) and although the ‘de-aging’ CGI may look a little strange at times, it will prove to be transformational in the business. This will be the final time that Scorsese, De Niro, Pacino and Pesci are all involved in the same project. So, cherish it, enjoy it. They have enriched our lives with their body of work and The Irishman is just the latest masterpiece in their canon.

Check out The Irishman trailer below: 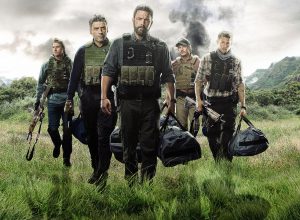 Joe McCann - 19th March 2019
We use cookies to ensure that we give you the best experience on our website. If you continue to use this site we will assume that you are happy with it.Ok