The Duna Arena was packed to capacity on Sunday evening as an expectant, and ever so slightly partisan home crowd filled the venue to the rafters, hoping to see their boys claim a 13th European Championship crown and first since Florence in 1999.

The finale brought to a close an exhilarating two-week long competition which saw an incredible 92 games played out across both the men’s and women’s events with an average of 21 goals per game.

As expected, the big guns all navigated their way through the group stages in both tournaments with little trouble. However, the quarter-finals of the men’s event saw 4-time defending champions Serbia eliminated by eventual finalists Spain in a penalty shoot-out. With the favourites no longer in contention, the men’s tournament suddenly opened up for the likes of Hungary, Spain, or Croatia to stake a claim to become the new Kings of European water polo.

The hosts disposed of old foes Russia by a four-goal margin in the quarters before seeing off stiff opposition in the form of Montenegro in the semi’s to earn a place in the final. Their opponents in the showpiece event would be the conquerors of Serbia, Spain who defeated Croatia in the other semi-final.

In the women’s tournament, results followed the form book as the favourites, Hungary, Spain; Russia and the Netherlands, all eased through to the semi-final stage. However, something had to give and after two hard-fought ties, it was defending champions the Netherlands and hosts Hungary who fell by the wayside.

Thankfully, the Hungarian ladies recovered their composure to claim the Bronze medal before watching the Spanish clinch a single goal victory over the Russians to claim a second European Championship title.

Following the success of the women’s team in the third-place play-off, the hopes of a nation rested on the shoulders of the men’s team to bring home the Gold against Spain. The two sides had played out an evenly contested draw in the Group stage of the tournament and a similarly entertaining and close-fought encounter was expected in the final. It did not disappoint.

The lead changed hands numerous times as neither side was able to build up a lead of more than two points. With the scores tied at 9-9 going into the final 30 seconds, the Hungarian’s mounted one final attack only to lose possession, resulting in a Spanish counter in what would be the final action of the quarter.

The majority of the packed Arena held its breath as the Spanish unleashed the final shot at the Hungarian goal only to erupt with relief as goalkeeper Nagy managed to deflect the shot onto the post and safety.

Having avoided a last-second defeat the buoyed up Hungarian’s were merciless in the shoot-out that followed, converting all penalty throws. The Spanish were equally ruthless until poor Alvaro Ortega saw his attempt saved by penalty specialist Soma Vogel to hand the title to the hosts and provide the fairytale ending the Championships deserved.

If you enjoyed that then please support us on social media: 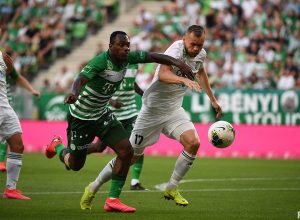 Drama to the Last as Loki Suffer Relegation Heartbreak