Hungarian football may no longer be the pinnacle of the game in Europe, but the NBI rarely disappoints and is never a dull affair.

Matchday 20 was supposed to bring us the second Budapest Derbi of the season with under-performing Ujpest due to host league leader Ferencvaros at the Szusza Ferenc Stadion on Saturday evening. The fixture, the most eagerly anticipated of the numerous Budapest derbies, was to be the first played on Ujpest’s new state-of-the-art hybrid surface.

Unfortunately, the pitch, which cut up badly during the Ujpest’s previous home game against MOL Fehervar, was deemed unplayable and the game postponed until further notice.

Ferencvaros’ lack of action presented MOL Fehervar with an opportunity to close the gap at the top to just three points as they faced third-placed Mezokovesd. With newly re-signed fans favourite Nemanja Nikolics watching on, the hosts duly secured a 2-1 victory, setting things up perfectly for this weekend’s trip to the capital and a top of the table clash with Ferencvaros on Saturday evening.

Honved secured their first victory of 2020 with a 2-0 win at home to Zalaegerszeg, and Debrecen scored a 2-1 win away at Diosgyor, leapfrogging their hosts in the process.

However, the real excitement was to be found at Paksi and Kisvarda. Paksi, at home to Puskas Akademia, found themselves down to 9-men before half-time as Bode and Konyves both saw red. Needless to say, the visitors ran out 2-0 winners however it was not until the final minute before former Hearts striker David Vanecek put the result beyond doubt with his 5th goal of the season.

Over in Kisvarda, the hosts got the better of an 8 goal thriller against bottom club Kaposvar, winning 5-3. Incredibly the score was only 1-1 at half-time, with the 6 second-half goals coming in a 32-minute blitz; including a hat-trick for Kisvarda’s Patrik Tischler.

Looking ahead to Matchday 21, Ferencvaros’ clash with MOL Fehervar is the only NBI fixture taking place in Budapest. Ujpest travel to Zalaegerszeg, while Honved visit Kaposvar. Delving into NBII, Vasas and MTK both have home fixtures on Sunday afternoon, entertaining Tiszakecske and Bekescsaba respectively. 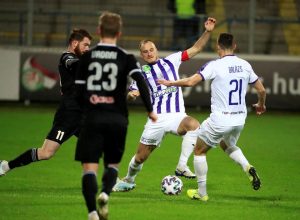