Learning that your manager has been temporarily suspended as a precaution against a potential Coronavirus infection, may not be the ideal preparation in the lead up to an important weekend fixture.

However, that was exactly the situation faced by the players of Budapest Honved in the lead up to last weekend’s game at home to Diosgyor.

Immediately upon his return from a trip home, Italian manager Beppe Sannino was temporarily relieved of his duties and replaced by reserve team coach Istvan Pisont. Thankfully, initial tests proved negative for the virus and Kispest will be hoping Sannino makes a swift return to the sidelines after suffering a crushing 4-0 reverse in his absence, ending the game with just 9 players as Batik and Mezghrani both saw red for two bookable offences.

Victory for Diosgyor saw them leapfrog Honved into 5th place, with both clubs tied on 33 points and 5 behind 4th placed Puskas Akademia who inflicted another defeat on struggling Ujpest; the Felcsut side winning by the odd goal in 5 in a fairly even contest at the Ferenc Szusza Stadion. The defeat for Ujpest sees Lilak continue their horrendous form so far in 2020 which has seen them win only once in 8 games so far this year across league and cup.

With Honved and Ujpest both losing at home, the onus fell on Ferencvaros to record a home victory for Budapest club and, as they tend to do more often than not, they came up with the goods recording a straight-forward, if somewhat unspectacular 2-0 win over Debrecen.

An early own goal, added to shortly before half-time by Frank Boli gave the hosts breathing space at the interval and, despite Debrecen’s best efforts, they rarely looked like giving the points up to the visitors.

Fradi’s win ensured they recaptured their 3 point advantage at the top of the table following  MOL Fehervar’s defeat of bottom club Kaposvar earlier in the day; relegation doomed Kaposvar have now lost their last 6 games on the spin and face a tough match against Mezokovesd-Zsory this weekend who will be out to avenge their shock defeat at home to Zalaegerszeg.

Despite the win, Zala remains second from bottom, however, those three crucial points saw them close the gap on Paks to just 2 points who, in turn, lost out to Kisvarda by 2-0; a result that also saw Kisvarda rise up to 7th place.

Matchday 24 see’s no NBI games played in Budapest; Honved visit Paks, Ujpest, desperate for a win to avoid being drawn into a relegation battle, travel to Diosgyor, and Ferencvaros face Zalaegerszeg in the evening kick-off.

Elsewhere, MOL Fehervar face a difficult away tie at Puskas Akademia, European hopefuls Mezokovesd visit Kaposvar, and Debrecen host Kisvarda in a mid-table clash that both sides will be eager to win to pull away from the drop zone.

While there may be no NBI football in Budapest this weekend, NBII side Vasas host Nyiregyhaza on Sunday evening. The Angyalföld side, who invested heavily in January with the signing of NBI’s top scorer Robert Feczesin, are on a four-game winning streak as they look to claw their way back into contention for promotion.

Currently third in the table, Vasas are 9 points adrift of second-placed Budafoki and will be going all out to secure the three points ahead of the Budapest Derby away to table-toppers MTK on the 14th. 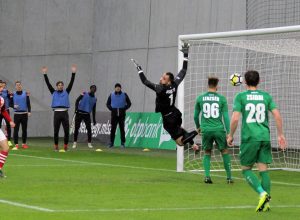 The Hungarian Football Round Up