While certain title races around Europe have developed into no more than a procession for their respective leaders over recent weeks, Hungary’s NBI is remains stoically competitive and tight-fought.

Going into the Round 24 fixtures, league leaders Ferencvaros held a three point advantage over challengers MOL Fehervar, however, by the close of play their lead had been reduced to just a single point as the Budapest outfit dropped points on their travels for the second successive away game.

Playing away at threatened Zalaegerszeg, Ferencvaros could only stumble to a 1-1 draw against a fired-up opponent who belied their lowly position with a strong performance, and could, on another day, have walked away with all three points.

As it was, Ferencvaros’ draw, coupled with Fehervar’s earlier demolition job on Puskas Akademia – the visitors winning 1-4 – was enough to see Fehervar to close to the gap to a single point and keep the pressure on at the top.

Mezokovesd moved a step closer to securing third spot and a Europe League place with a comfortable 4-0 win away at sorry Kaposvar whose long winless continues to grow with each passing week and now extends to 8 games.

Another side on the slide, Ujpest, continued their new-year slump with another demoralising defeat, this time away to a resurgent Diosgyor who are currently on a four game unbeaten run.  After this most defeat, it emerged that Ujpest manager Nebojsa Vignjevic had offered his resignation only for the club hierarchy to reject his offer.  Despite this, the future of the Serbian coach hangs in the balance and it remains to be seen just how long he will hang about if current form continues much longer.

While one Budapest based manager may soon be departing the scene, Honved will be hoping that their Italian manager Giuseppe Sannino will be back on the sidelines as soon as possible following his imposed Coronavirus quarantine; Honved have failed to win both games during Sannino’s absence, only managing a draw at the weekend away to Paks.

In the weekend’s final match, Debrecen recorded their first win in four games with a 1-0 win at home to Kisvarda, a result that saw the hosts leapfrog their visitors and move up to 7th place in the table.

As highlighted in last week’s update, the big Budapest game of the weekend took place in NBII where a revitalised Vasas comfortably disposed of Nyiregyhaza 4-1; Robert Feczesin and Adam Balajti both scoring doubles.

The weekend could hardly have gone any better for promotion pushing Vasas as both sides above them, MTK and Budafoki, both lost to Kazincbarcikai and Ajka respectively.  With a derby match coming up away to MTK this weekend, Vasas now find themselves just 6 points off a promotion place, a win in the derby would confirm their promotion credentials.

In a rare turn of events, both NBI and NBII will play all fixtures on Saturday this weekend to accommodate the National March 15th Holiday on Sunday.  Despite being an NBII fixture, the derby fixture between MTK and Vasas takes centre stage of the games being played in Budapest.  That said, Ferencvaros will look to get their title push back on track at home to bottom club Kaposvar, and Honved play host to Kisvarda as they look to revive their flagging European hopes; this fixture will take place Vasas’ Rudolf Illovszky as the Hidegkuti Nandor will stage the derby.  Ujpest are designated as home side for their fixture against Paks, however, with the new surface still unplayable, the game will take place out of town in Zalaegerszeg. ＊ Please note that due to the recent state of emergency called in Hungary, these games may not go ahead.

We hope you enjoyed reading this. 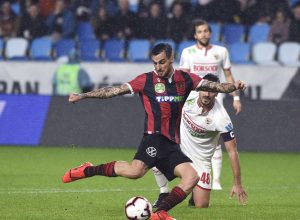