While the debate rages on in the UK and elsewhere around Europe over the continuation, end, or voiding of the current football season, the MLSZ (Hungarian Football Federation) has announced plans to resume top-flight football by the end of this month.

Following a previous Government announcement lifting the restrictions on athletes movements and allowing them to train in groups again from the beginning of this week, the MLSZ has confirmed that the NBI will resume on 30th May with the Magyar Kupa, at the semi-finals stage, resuming a week earlier.

Paused after 25 rounds, the NBI will now endeavour to play out the remaining the 8 rounds before crowning its Champion; Ferencvaros, with two games in hand, held a 3 point advantage when the league was called to a temporary halt and will be strong favourites to see the season through on top.

A statement released by the MLSZ advised that the decision to restart football activities in Hungary was taken after consultation with the National Chief Medical Officer and that protecting the health of athletes and staff is a key priority.

As such, a detailed health and examination protocol has been established with clubs required to test staff and players for Coronavirus twice a week before each match.  Players who test positive for the virus will be separated from healthy players who can continue to play after producing a negative test.

The relaxing of lockdown restrictions for athletes would, therefore, appear to remove the requirement for all players who have come into contact with an infected teammate to enter into a period of quarantine once a positive test has been returned, thus allowing games to return.

A further stipulation for the return of football in Hungary is that only essential persons are to be admitted into the grounds on matchday, with the games to be played behind closed doors.  However, media representatives, essential stadium staff, and club representatives can attend fixtures with no pre-requirement to take a Covid-19 test; the proviso being that everyone entering the stadium must declare asymptomatic and strictly adhere to the general regulations in the stadium area.

Separate player, staff, and media zones will be identified and must be adhered to.

For the fans, nothing much will change.  Attendance is low in Hungarian football at the best of times and all games will be streamed live on the state-owned sports channel and website M4 Sport as well as on club YouTube channels.

Outside of the NBI, all other football, with the exception of the women’s NBI, will cease with the current standings serving as the final league placings.

The current position of the MLSZ is that there will be no champions, no promotion, and no relegation in the lower leagues.  A possible exception being that MTK and Budafoki, first and second in the NBII, could be invited to replace the bottom two clubs in the NBI come to the end of the season.

No doubt the final picture will become clearer in the coming weeks, but for now, we have some live football to look forward to once again. 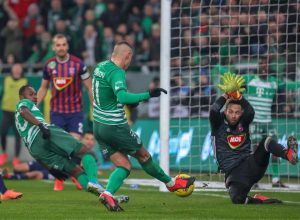