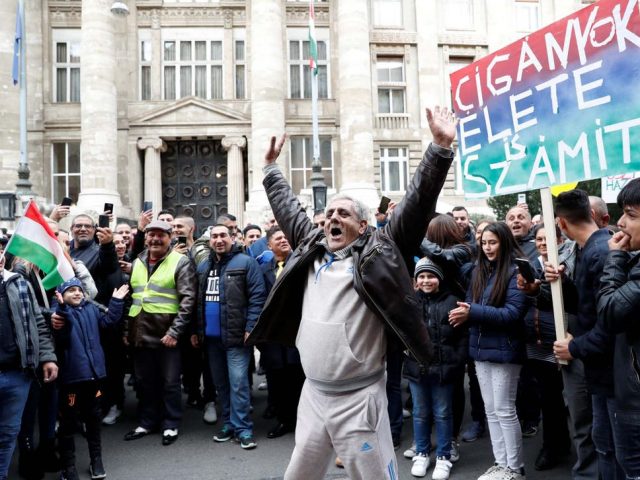 Tonight, police and far-right activists are preparing for a face-off outside the National Roma Council in Budapest, in a depressingly familiar continuation of a tragic story that began with a double murder on Deák Ferenc tér just under a week ago.

Although the full details of the case remain unclear, it seems that two gangs of youths, around 10 people each, mostly already known to the justice system came together, drugs were involved, and two people ended up dead from stab wounds following the clash.

The suspected perpetrator is an 18 year old Roma, who made a written confession (which he has since retracted), and there is a vigil planned by far-right groups in remembrance of the victims.

But maybe the story didn’t really start there.

Hungary is an interesting puzzle when it comes to racism. By far the largest ethnic group in Hungary is Hungarian, coming in at around 94% of the total population of the country.

Generally speaking here, ‘Hungarian’ should be interpreted as white Caucasian. In fact about half of the remaining ethnic ‘minority’ groups in the country can be considered white Caucasian, leaving only just over 3% of the population who are not white Caucasian – Hungary’s largest minority, the Roma.

The Roma can trace their ethnic roots back to Northern India, but have been established as a community in Hungary since at least the 14th century. During the Second World War, almost 30% of the Roma in Hungary died as part of the ethnic cleansing that is known as ‘Porajmos’, or the Romani Holocaust. Nowadays, it’s difficult to say exactly how many Roma live in Hungary – according to the census, it is around 200 000, but experts say that many people do not self-identify as Roma out of shame, and true estimates range up as high as one million.

It doesn’t take long, even as an outsider, to start noticing Hungarians making derogatory remarks about the cigány, the ‘gypsies’, who are all tarred with the same brush of being thieves and swindlers and generally low-lifes. And while anti-Romani sentiment is still particularly prevalent in far right extremist groups, it is by no way limited to a fringe feeling. You could be forgiven for believing that all Hungarians harbour negative feelings about the Roma – and indeed, research indicates that more than 60% of Hungarians believe that “the inclination to criminality is in the blood of Gypsies”, and almost half (42%) support allowing pubs, clubs, and discos to refuse entry to Romani people.

Life expectancy is also lower among Romani populations by around 10 years, likely linked closely to economic circumstances, which are generally significantly worse in the Romani community than in Hungary overall.

There’s a long way to go to fixing the situation, but it doesn’t really seem to be high up on anyone’s priority list.

And when even the prime minister, who himself has roots in Romani communities, calls the Roma an inherited historical fact to be lived with, but not to be wished on the West, it’s hard to see where the changes will come from.

Note on terminology: The terminology in this article is intended to be respectful. However, there are many conflicting opinions on the ‘correct’ terms to use when describing this community. This article uses the terms Roma and Romani as the respective noun and adjective to describe the whole of the minority group (both as an ethnic and a cultural minority). The word ‘gypsy’ appears in the article as a direct translation of the Hungarian word ‘cigány’. Note that it is far from clear whether this is pejorative – see the featured image where Romani protestors are carrying a sign saying ‘gypsy lives matter too’