The midweek football action was split over two days with the Magyar Kupa semi-final second legs taking place on Tuesday evening, followed by the Ujpest-Ferencvaros Budapest Derby on Wednesday.

In the first of Tuesday’s Kupa double-header, tournament favourites and titleholders, MOL Fehervar played host to Mezokovesd-Zsory who were aiming to qualify for their first-ever Kupa Final. The visitors, who have impressed greatly this season in the NBI with their commitment to attractive attacking football, made the perfect start opening the scoring after just 8 minutes. Zivzivadze’s rather fortunate rebound cancelling out Fehervar’s away goal from the first-leg and giving Mezokovesd a 2-1 lead in the tie.

Things went from bad to worse for the hosts 6 minutes after the interval as Pekar swept home after an incisive counter-attack to double Mezokovesd’s lead and put the side from northern Hungary firmly in the driving seat.

Fehervar fought back and levelled the tie with goals from Hodzic and a late header from Stopira, however, it was all in vain as Mezokovesd held on to secure a historic place in the final thanks to the away goals rule.

The second semi-final was an all Budapest affair as Honved took on MTK in the surreal environs of an empty Uj Puskas Stadion. The new 67,000 capacity national stadium having been selected to host the game while Honved’s Bozsik Stadion undergoes reconstruction.

Poised at 0-0 from Saturday’s first-leg, Tuesday’s encounter was a largely nervous affair with any moments of inspiration from either side few and far between. There was plenty of effort and energy on show from both sides but, just as at the weekend, chances were at a premium with attacking play falling short in the final third.

With both sides evenly matched it was clear that whoever scored first would go on to win the tie.

Alas, after 210 minutes of goalless play across both games, the tie was eventually settled via a penalty shoot-out with Honved emerging victorious.

In truth, defeat was harsh on MTK. The NBII side was more than a match for their NBI opponents but lacked the killer edge to their attacking play. Even more disappointingly for Michael Boris’ men is that depart the tournament with the dubious honour of not having conceded a goal throughout their run to the semi’s.

Ferencvaros played the last of their games in hand on Wednesday as they faced local rivals Ujpest.

Normally a lively and raucous affair, played out to a backdrop of pyrotechnics and smoke bombs, Wednesday’s Budapest Derbi was played out in the now-familiar scene of an empty a quiet stadium.

The lack of atmosphere didn’t stop Ivorian hitman Franck Boli from opening the scoring early on with a fine angle effort from outside the box to give Ferencvaros the lead.

However, without the encouragement of the home support, the expected rally from Ujpest failed to materialise.

The hosts enjoyed the lion’s share of possession but were not able to turn it into any real chances of note and rarely threatened to level the scores.

The victory for Ferencvaros saw them extend their lead at the top of NBI to 9 points, with 8 games remaining, and a full card of fixtures to be played over the weekend. 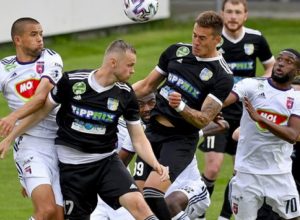