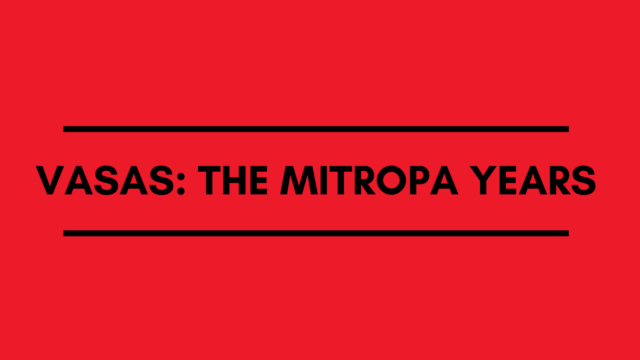 Despite the domestic upheaval of Communist rule and the failed uprising of ’56, Hungarian football enjoyed its most prolific era during the 1950s and 60s.  The magnificent Aranycsapat excelled on the International stage, losing only once during a 69-game streak between 1950 and 1956; sadly, that solitary defeat came in the 1954 World Cup Final against West Germany.  However, the Nemzeti Tizenegy did secure three Olympic Gold medals at the 1952, ’64, and ’68 Summer Games.

However, it is Vasas, currently languishing in the Hungarian Second Division, who can lay claim to being Hungary’s most successful side on the European front in terms of trophy wins with a record 6 Mitropa Cups to their name.  Four of which were won during the most successful decade of the club’s history between 1956 to 1965.

The Mitropa Cup may now have disappeared from the European football calendar along with the Cup Winners Cup, but from 1927 to 1992 the competition was largely played out between clubs from Central Europe; Austria, Czechoslovakia, Hungary, Italy, Yugoslavia.

Although not the first Hungarian side to win the competition – Ferencváros, Újpest, and Vörös Lobogó (now MTK) had all previously lifted the trophy – Vasas first successes came in 1956 when the side of the Iron Workers showed true steel to defeat the Austrians SK Rapid Wien in the final over three games.

Having drawn the first-leg 3-3 in Wien, Vasas and Rapid played out a 1-1 at the Népstadion in the return game on 28th July 1956.  With the scores tied and the introduction of the Away Goals rule still some way down the line, the final was decided in a winner-takes-all play-off, also held at the Népstadion on 4th August.

There was no doubting the outcome of the play-off as Vasas routed Rapid 9-2 to claim their maiden Mitropa Cup, with Gyula Szilágyi, who remains as Vasas all-time leading goal scorer, claiming 4 goals in the play-off and 5 in total across the three games of the 1956 final.  Tournament top scorer and 1954 World Cup runner-up Lajos Csordás hit three goals over the three match final.

The side from Angyalföld in Budapest’s 13th District did not have to wait to long to claim a second Mitropa Cup as they successfully defended their crown in 1957, this time comfortably seeing off the Yugoslav’s of Vojvodina Novi Sad, who included a young Vujadin Boskov amongst their ranks, 5-2 on aggregate.

Szilágyi was on target again, scoring once in the 4-0 first-leg victory, however, it was Dezső Bundzsák with three goals across both legs who was the start of the final for Vasas.  Bundzsák would later go on to manage Vasas between 1980-82 following a period in charge of the Egyptian national side and in between two spells managing in Greece.

Title number three, and the first under legendary coach Rudolf Illovszky, duly arrived in 1962 as Bologna were swept aside 5-1 at the Népstadion rendering a 2-1 reverse at the Stadio Littoriale meaningless.  Bundzsák was again the star for Vasas hitting 5 of their 6 goals in the final.

To highlight the level of opposition Vasas were competing against, Bologna would go on to lift the 1963/64 Italian Serie A title and included future World Cup runner-up Helmut Haller and future European Champion Giacomo Bulgarelli in the side that lost to Vasas.

Normal service resumed in 1965 as Vasas secured their fourth Mitropa Cup with a single goal victory over Fiorentina as the final moved to a one-off match for the first time; club legend Kálmán Mészöly, who had previously won the competition in 1962 scoring the only goal.

Mészöly, nicknamed The Blond Rock, was that rare beast of a one-man club and made over 270 appearances for Vasas between 1959 to 1972 winning four Hungarian Championships and three Mitropa Cups along the way.  He was a member of Hungarian squads at the World Cups of 1962 and 1966, and the 1964 European Championships, playing a total of 61 games for the Nemzeti Tizenegy. In addition, Mészöly was also selected to take part in several World-Select games throughout his playing career.  As a coach, Mészöly led Vasas on four separate occasions and the national team three times, successfully guiding them to the 1982 World Cup Finals.

By the time Vasas next appeared in a Mitropa Cup final, the tournament had returned to the traditional two-legged finals.  Cup holders Inter Bratislava of Czechoslovakia were Vasas opponents in the 1969/70 final and, having dispatched of Budapest Honvéd, in the semi-finals were out to complete a Hungarian double.

Bratislava won the home leg of the final 2-1 before succumbing 4-1 to a János Farkasinspired Vasas in the second-leg in Budapest.  Farkas, an Olympic Gold Medal winner from the 1964 Tokyo Games, scored twice in the final 15 minutes of the second game to secure Vasas 5th Mitropa Cup and also earn the personal accolade of Tournament Top Scorer.

The 1969/70 Mitropa Cup success would prove to be the beginning of the end of Vasas glory days as Ferencváros emerged as the dominant club domestically with Újpest, MTK, Debrecen, and Fehervar providing the sternest opposition at various times.  A league title in 1976/77 and a Hungarian Cup in 1985/86 were rare moments of cheer.

Extended excursions on the European stage became few and far between, however, Vasas did manage to lift a sixth and final Mitropa Cup in 1982/83.  By this time, and with the competition in decline, the format had altered to a round-robin affair with Vasas seeing off FK Galenika Zemun (Yugoslavia), TJ ZVL Žilina (Czechoslovakia), and Hellas Verona (Italy) on their way to the title.

Nowadays, Vasas have their eyes set only on gaining promotion back to the Hungarian top-flight with dreams of a return to European football a far off ambition.